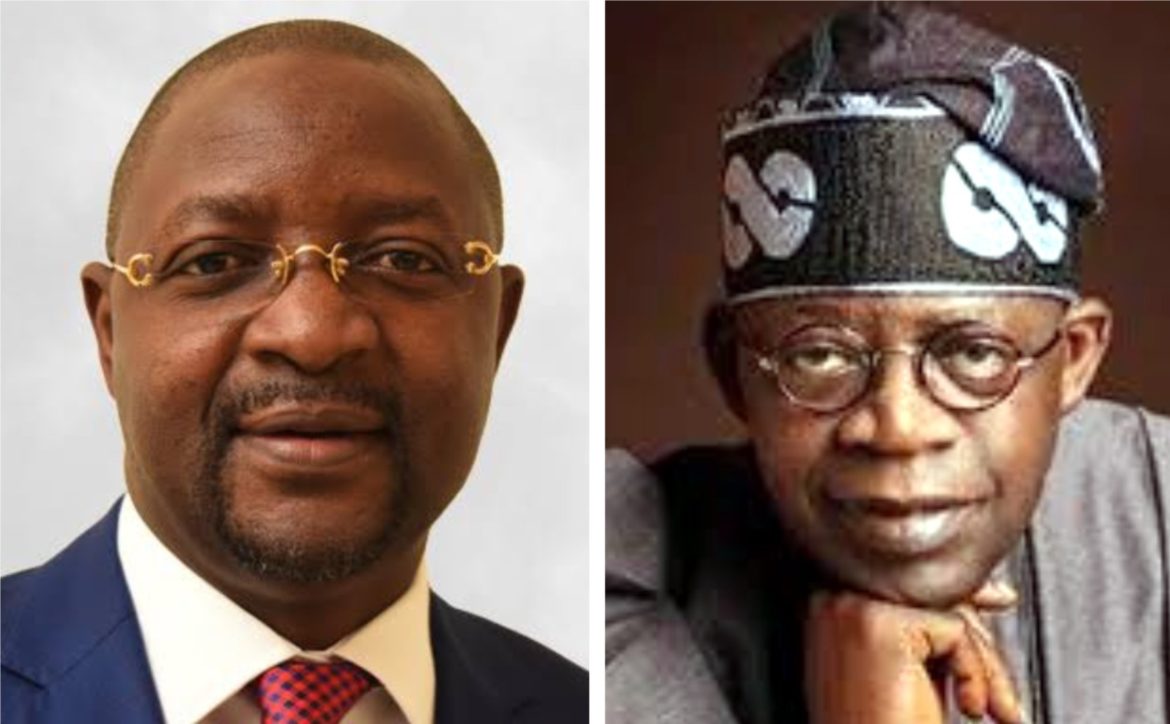 •What Sports Minister Said About Him

Many don’t know that Sports Minister, Chief Sunday Dare started off years back as a Special Adviser on Media to Asiwaju Bola Tinubu. That was after having had a distinguished career in the Media and as a Social Media Expert. When Tinubu turned 60 a few years back, Dare was one of the aides of Tinubu who contributed to a book of Tributes on ASIWAJU, wherein he revealed what many don’t know about his political godfather. According to him, “in a country where leaders are few and heroes fewer, Asiwaju Bola Ahmed Tinubu towers in the small tribe of leaders that give this country hope that the best is still possible.” Nigeria is in such a season when leaders that can shed their fears are needed to lead the Nigerian project. In Tinubu, Nigeria has found a true leader who sadly may be ahead of his time. He has devoted the better part of his political career to pointing the road that lies before us and the path we must take to birthing an emancipated society.”

“No wonder today in Nigeria he is one of the most influential politicians around. Tinubu brings alive the assertion of Kenneth Blanchard, who said, “The key to successful leadership today is influence, not authority”. Yet, the mention of the name Tinubu evokes different feelings and reactions. He is feared and respected. And of course, others simply hate him for what he stands for. He is perceived by scores as a very present threat to their political ambitions. His deep knowledge of politics and his tremendous capacity to take risks remain unequalled in the annals of our political history. But how does one go about unwrapping this enigma wrapped in mystery?

A study in leadership will reveal the man Tinubu. He is one person who has displayed the very rare leadership qualities we hardly find around. These qualities include foresightedness, vision, charisma, ability to spot talent and employ same, the guts to confront situations, the capacity for deep thinking and in an uncanny way the ability to empower and at the same time disrobe. When we look around us and in nearly three decades of being in business, politics and power, the world around Tinubu is littered

with awards, trophies, victories, conquered and unconquered, thousands of people that he has helped and empowered in one way or another and of course, failures and disappointments. His stewardship has been quite sterling such that at 60, Tinubu can be said to have passed that test of a true leader. According to Walter Lippmann, “The final test of a leader is that he leaves behind him in other men, the conviction and the will to carry on.” Tinubu reminds us all of Mohatma Karamachand Ghandi, one of the most influential figures in modern social and political activism who believes that we must be the change we wish to see. Ghandi also admonishes that the best way to find yourself is to lose yourself in the service of others.

In March 2010, I wrote about how Tinubu was set on a course to conquer politically. In 2011, he presented Nigeria and Nigerians with a new chapter in political doggedness and taught his political adversaries a lesson in political strategy. As far back as I can remember, many drew our attention to the fact that Bola Ahmed Tinubu (BAT) caught in the constantly shifting sands of Nigerian politics has increasingly become difficult to ignore. Through his political exploits he soon became an undisputable

generalissimo in the country’s political landscape. If the understanding of politics is as important as how it is practised, then Bola Tinubu is a testimony. Well schooled in the politics of the grassroot and people-centred politics, Tinubu stands tall as one of the political masters of our time. Tinubu’s political sagacity draws heavily from the above-ciaring, focused, calculative and at times deadly in execution. A man with a tremendous capacity to do good both for the individual and the society at large, he has managed to combine political leadership and service to humanity. This is important because many of our politicians once they grasp power lose the people and immerse themselves in enrichment schemes. For this class, power is a means of appropriating the resources of the state for personal use. Power for them is not an instrument for change or a tool to accelerate the development of the society.

Tinubu continues to demonstrate that power and its apparatus can be deployed to uplift the people and make the system work for all. Like a true general, he has built a political army who share his orientation about power and Nigeria’s urgent need for progressive change. In the annals of Nigerian political history; nothing best demonstrates political foresightedness and brilliance like the succession that took place in Lagos. Like a true leader who wanted his people to continue to have the best from government, he stuck out his neck for a worthy successor. Against all odds and at the risk of losing the political kingdom he had painstakingly built over the years, Tinubu chose Babatunde Raji Fashola as his candidate for Lagos Governor. The rest as they say is now history. A willingness to put his fame and political reputation at risk for a cause he believed in is almost second nature to Bola Tinubu. This is a trait totally lacking in our present day politicians. The Bola Tinubu trajectory that we see and talk about today did not come easy. He paid his dues, he strategized, he invested time and energy, he made sacrifices, he formed political alliances, a few times he butted heads with his opponents and above all he understood the doctrine of power. That power should be held in trust for the people and used for the good of the society.

Just like late Chief Jeremiah Obafemi Awolowo, described as the best president Nigeria never had, Tinubu burnt the midnight oil brainstorming on policies that can transform the society. Like Chief Awolowo said in one of his numerous books that when others are carousing at night and roaming around, he is at his table pondering about societal problems and how best to tackle them, that has been the story of Bola Tinubu.

At his Bourdillon residence in Ikoyi, Lagos, nightfall folds into the morning light daily. Meetings with political leaders and party faithful takes place all night and all day. The calibre of people that gravitate in and out of his house is a pointer to the quality of thinking taking place. The circle of visitors is beyond party loyals but cuts across partisan lines and religious affiliations. We.know that from these nocturnal meetings have emerged quality thinking that have been fed into the process of governance both at the state and federal levels. Bola Ahmed Tinubu is not just a state or regional champion, but a well respected national leader whose voice or opinion on national issues are sought and respected. But  his his strength and legitimacy is drawn largely from the state and regional platform. He is one who understands the primacy of local politics and how success at that level can be pivotal to achieving national relevance and followership. Politics is about trust and no one understands this better than Tinubu. Trust though though is rare. He was trusted as a Senator of the federal republic, then as governor of Lagos State and now as an AC chieftain and leading opposition figure Tinubu has not violated his contract with the people. That’s why he will remain for all time the Asiwaju.

Forged in battle from the days of exile and propelled into power by a near revolutionary process engineered by the people, Tinubu arrived the saddle of power ready to lead. He showed us all that leadership was more about being prepared. Because he was ready, he had a plan of action. The rest is now history. Lagos is better today because of the foundation Tinubu laid. Lagos is a model today because he was smart enough to back the right horse for the race. Lagos still ticks and remains the centre of political articulation for the South-West because Tinubu had the presence of mind to develop political relationships and build political platforms. But more importantly, because he identified several people with potentials and empowered them to be able to serve the people.

His brand of politics though not entirely new is a refreshing departure from what we are used to. It is a politics of ideas that leads to creating a vehicle that only those ready for the long haul can enter. It is big enough to take everyone who desires to serve the people but too small for individuals who want to massage their political egos. Litter the Nigerian landscape with a dozen other Tinubus and Nigeria will be on a roll and the bloodless social revolution we all desire will begin to manifest. Therefore, to a man who has demonstrated courage, a man who continues to dominate the political landscape, a man on top of his game and one unwilling to yield not even an inch of his political territory to the enemy, there can be no greater tribute than to wish him more years in the battlefield. I am indeed tempted to say Iike teacher Tai Solarin-may your road be rough but will restrain because it has been a rough road for you already and you have prevailed. Tinubu is undoubtedly a builder: a builder of people, a bridge-builder across lands, a builder of careers and above all a nation builder whose quest to see a Nigeria better run with more and more Nigerians is insatiable. With this said about the man Tinubu, let me end with the words of John Ruskin who said, “When we build, let us think that we build forever, Let it not be for present delight nor for present use alone.

Let it be such work as our descendants will thank us for. And let us think as we lay stone on stone, that a time is to come when those stones will be held sacred because our hands have touched them and that men will say as they look upon the labour and wrought substance of them, ‘See! This our fathers did for us’” (John Ruskin, 1819-1900).