Home News How VP Osinbajo Has Won The Hearts Of Royal Fathers, Politicians, Business Leaders, And Others Across Nigeria
News

How VP Osinbajo Has Won The Hearts Of Royal Fathers, Politicians, Business Leaders, And Others Across Nigeria 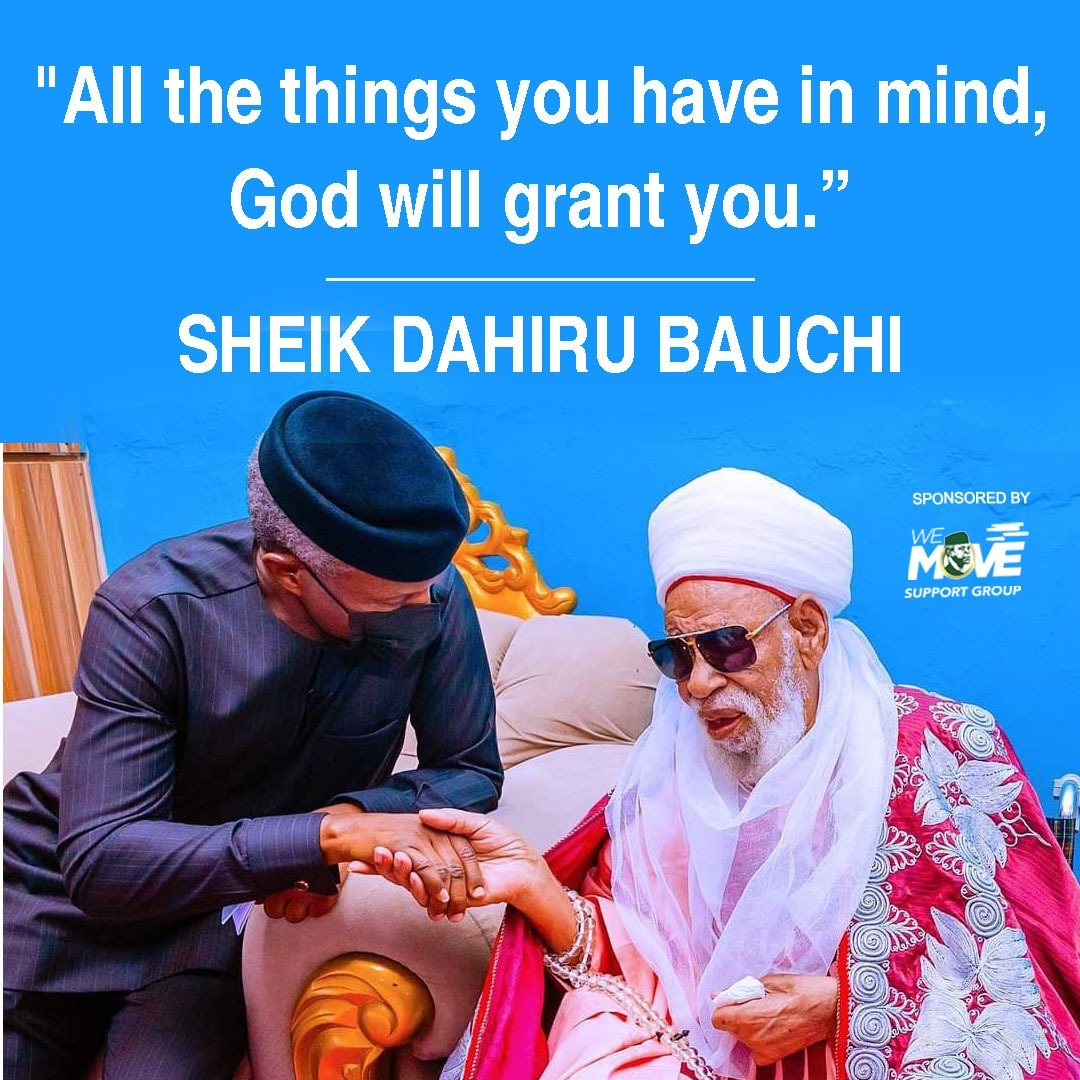 Ahead of the All Progressives Congress (APC) party primaries coming up this week, the vice president has visited states in all the six geo-political zones, while actively ensuring that all responsibilities within his office as the vice president are being handled adequately. From his visits and engagements, one thing that has come out strongly is the fact that the vice president’s exceptional charisma has enabled him to interface adequately with different segments of the Nigerian society with evidence of a deep-rooted passion for the vice president and a genuine acceptance and admiration on the part of those the vice president has met with within the course of his nationwide consultative visits.

Sheikh Dahiru Usman Bauchi said of the vice president “All the things you have in mind, God will grant you”. This prayer is a testimony to the vice president’s constant interactions, interface, and recognition of traditional institutions and royal fathers all over Nigeria.

Another positive view was expressed by the revered, Oba of Benin, His Royal Majesty, Omo N’Oba N’Edo Uku’ Akpolokpolo Ewuare II when he met with the Vice President, he said “He (Osinbajo) is sure to drive Nigeria forward. He could be the best that would drive Nigeria forward.” This demonstrates the fact that the vice president is held in high esteem and trusted enough that he will be able to accomplish all that he will promise to do when elected as president.

In the same breath, the Obong of Calabar, His Eminence Edidem Ekpo Okon Abasi Otu V has this to say about the vice president “VP Osinbajo has shown clear capabilities and courage in handling Nigeria as seen in his capacity”. This is evident in the characteristic manner the vice president has, working with the president, ensuring stability within traditional institutions, and giving due recognition to the royal fathers whose rule is to stabilize the social system.

The revered Olubadan of Ibadan,  His Royal Majesty, Oba Mohood Olalekan Ishola Balogun Alli, the 42nd Olubadansaid of the vice president, Professor Yemi Osinbajo “Very soon in God’s Grace, you will be President of Nigeria”

As an astute administrator and an outstanding legal luminary, the vice president’s committed acts of benevolence and hard work have attracted admiration from top members of the political class, former heads of state, and a host of prominent leaders who identify with the integrity of the vice president. Even the president, Muhammadu Buhari reckons with the accomplishments, dedication, and loyalty of the vice president with whom he has served the country for seven years without rancor or disagreement.

The former head of state, President Ibrahim Babangida (IBB) says of the vice president “Osinbajo is a good man who has conviction about Nigeria.”  There is no doubt that the vice president’s love for Nigeria and indeed his passion for improved living standards is the major motivation for his strategic engagement with all sections of the Nigerian society throughout his seven years of meritorious service as vice president, and this passion will be carried forward into a greater extent when elected as president.

Similarly, a one-time governor of Lagos state and national leader of the APC, Bola Ahmed Tinubu said of the vice president “since I knew him, he has not changed in brilliance commitment, selflessness, and loyalty to the Nation.” And this is demonstrated in the manner the vice president handled the office of the attorney general and commissioner for justice in Lagos state. The same legacy of service has found expression in his role as vice president.

The president says “Osinbajo is the bridge between government and the people” underscoring the determining role of the vice president in bringing the policy thrust of the government to the grassroots, this is seen in the execution of the National Social Investment Programmes which are designed to address poverty, unemployment and support businesses.

Governor Charles Chukwuma Soludo, the current governor of Anambra state and a one-time governor of the Central Bank of Nigeria (CBN) said of the vice president “You are my brother of many years, be rest assured that you have my support.” This testimonial accentuates the vice president Yemi Osinbajo’s charisma with which he has provided genuine leadership to the economic management team which the Presidential Economic Advisory Council to which the current Anambra state governor was a member and on which platform he, as former governor of the CBN, made significant contributions to the development of the economy. It is to the credit of the vice president and his team that Nigeria was able to exit the economic recession twice in a roll without damage to the economy.

In the same light, the serving governor of Kaduna state and former minister of the FCT, Mallam Nasir el Rufai has this to say about the vice president “You are a bridge-builder, a man who is a friend to Imam and Emirs. A professor who can speak the language of the Ordinary People.”

We Move Group, a frontline group of prominent Nigerians rooting for the vice president to become the next president come 2023 said of him “Osinbajo is the most qualified”. The group went further to explain that its endorsement of the Vice President is hinged on Prof. Yemi Osinbajo’s six identified strengths and qualities which include time-proven credentials, competence, character, conviction, compassion, and commitment to national unity which are evidence-based reasons that justify the choice to succeed the current president.

An independent pollster, IFP& P Polling speaks on professor Osinbajo’s achievements, noting that “One out of two think Osinbajo is the best person to run the country”. This lends credence to the vice president’s sheer sense of passion and commitment to the project of building Nigeria and his non-compromising position regarding the goal to invest massively in developing the economy for the future.

The world-leading technology giant, Google describes Prof Yemi Osinbajo as “the reason why we are investing in Nigeria.” The vice president in his capacity as the chair of the National Economic Council which meets monthly has been able to consistently interface with leading global technology companies and organizations that are heavily invested in the digital economy space such as Google, Facebook, and others. This regular interface and interventions are designed to ensure that Nigeria receives a fair amount of the global technology sector investments flowing from these companies and such that young Nigerians in the technology and innovation space have benefited massively.

Given the plethora of testimonials backed by strong evidence to justify his experiences and his records of achievements in consolidating the various sectors of the economy and national life into the overall national development agenda, given also his commitment and passion for Nigeria and the desire for development, it is expected that the primary election to decide the party flag bearer for the APC will be decided based on these merits and that in 2023 Nigerians will have a chance to be led by a detribalized, a globally competitive and well-educated president like the Vice President, Professor Yemi Osinbajo.

How VP Osinbajo Has Won The Hearts Of Royal Fathers, Politicians, Business Leaders, And Others Across Nigeria was last modified: May 22nd, 2022 by Reporter