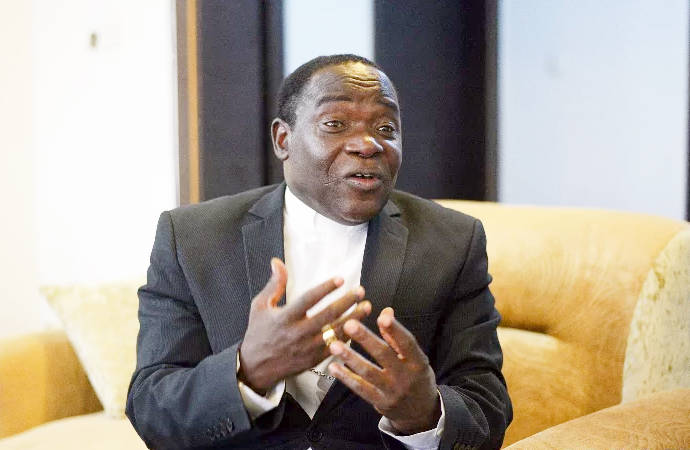 The Catholic Arch Bishop of Sokoto, Mathew Hassan Kukah, has said that there is a serious threat of hunger in Southern Kaduna as a result of the incessant attacks in the area.

He said the development had led to massive destruction of lives and properties.

Kukah, who stated this when Nigerian Catholic Bishops visited the communities attacked by suspected Fulani herdsmen, also reaffirmed the record earlier released by the Catholic Diocese of Kafanchan that over 800 people have been killed in Southern Kaduna.

Bishop Kukah, while speaking to journalists in Gidan waya, said the systematic attacks on Southern Kaduna was a great warning to Nigerians, adding that it had shown how human life had become cheap to destroy.

After going round the communities that were destroyed by suspected Fulani herdsmen in Goska, Pasakori, Missisi and Gidan Waya all in Jema’a local government, Kukah said: “I am happy to be here to see things myself. This level of killings and destruction of properties has just mark the looming tragedy of how our country has become.”

“This tragedy has been happening for a very long time in Nigeria and issues like these are becoming increasingly sophisticated by some people causing harm to their fellow brothers.

“What I have seen here today of which l am going to take away is the agony of the ordinary people who are totally devastated by what has been done to them by an external enemy. This is what we have been hearing on the news,” Kuka noted.

The Bishop said: “What is more important here is that the people are holding themselves together. It is left for the government to provide the welfare to the people,” Kukah added.

“The government must treat this issue as an emergency. Happily, things have begun to take shape in the Northeast. We are hoping that government will do what need to be done so that this menace is nipped as quickly as possible.

“We have been told that air surveillance is been carried out which of course, we don’t know the level of the quality of the equipment they have. We also hope that the government will understand the need for the restoration of peace as quickly as possible in our communities.

“The nature of injustices and the inability to reverse some government institutions to this area is alarming. For over 50 years, this region has been neglected, these are the problems.

“The questions are whether the government has the disposition to dismantle this structure of injustices or not. So, what is going on here is just a physical manifestation that needs to be addressed,” Bishop Kukah explained.

The Catholic Bishop of Kaduna, Most Rev. Mathew Ndagoso, who was the team leader said what they saw confirmed the stories they have been reading in the media.

“What we have seen today has confirmed the stories we have heard and read on the pages of newspapers and television stations. It is rather unfortunate we are still where we are as a people.

“People know that the Catholic Church is an institution that is well grounded. Our people are virtually in all communities and that is why they brought out the records of the people killed including time and dates.

“The figure the Catholic Church gave which became a subject matter is correct. We are here, we have seen and confirmed. People who should know better about the figure are here. Check the record of the Catholic Church report, it has date, time, villages and the local government areas. The records are all there.

“Before now, no one was able to give us such an accurate report,” the Bishop said.

Special Mass was offered at the Catholic Church, Gidan Waya, for those that lost their lives and for the restoration of peace in the Southern part of Kaduna State.

Hunger looms over in southern Kaduna over incessant killings – Bishop Kukah was last modified: January 25th, 2017 by Arinze Ago

Buhari is yet to receive Peace Corps Bill – Presidency