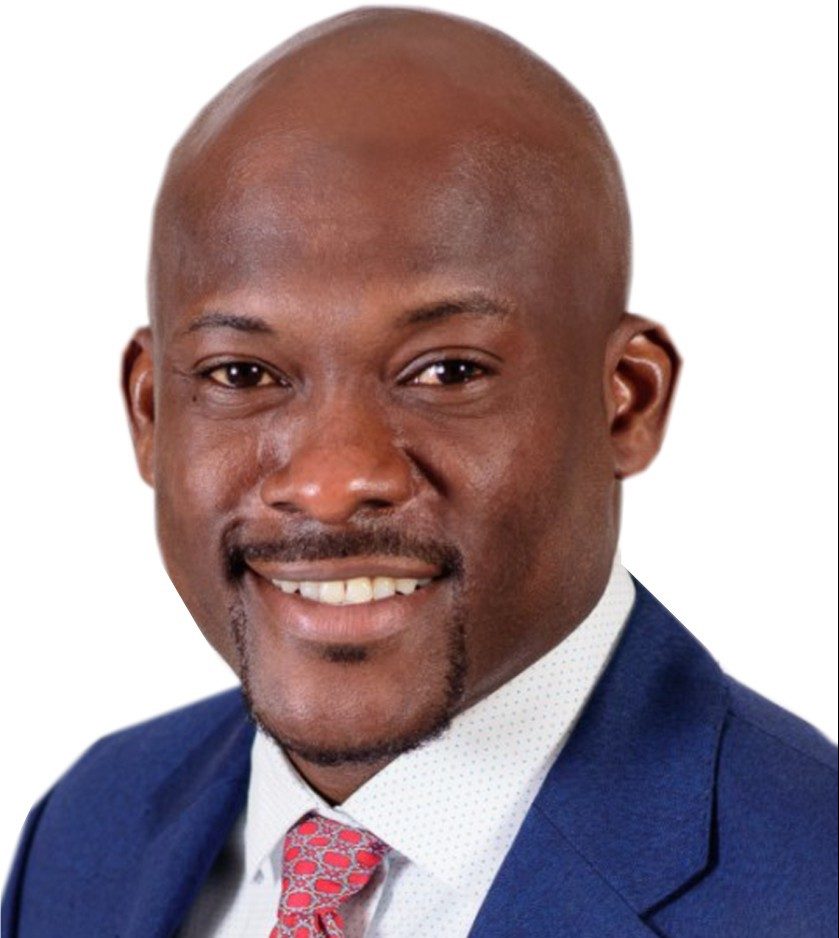 When you meet Ibrahim Babajide Obanikoro, (IBO) the tall and handsome son of Senator Musiliu Obanikoro (Koro)  for the very first time you are likely to make the mistake of thinking he will just be like the son of other rich men who are usually spoilt, laid back and unable to move an inch without Daddy’s support. That was my thinking when I drove to Ikoyi in Lagos to interview him last week. That was what was uppermost on my mind as I was ushered into the office of this pencil-slim and stylish youngman who wants to be the next House of Reps member, representing Eti-Osa Federal Constituency in Lagos. You don’t need to be told that he is the son of Koro. Jide is a split image of his dad. They have a facial semblance that is remarkable. They are both slim and tall.

They have athletic figures. They are both handsome. But all that is beside the point.

IBO does not even play that up at all. It was even all the more shocking that until I asked him, he never for once made reference to his dad, one bit, in our discussion.

Like his dad, he is a tough nut to crack. He is bold, daring and confident. And he is quite brilliant and knowledgeable too about the ABC of Lagos politics. He speaks with a lot of gusto, and confidence

In fact, IBO oozes the kind of confidence every practising politician needs. He answered every question exhaustively and his answers showed a great mastery of the Eti Osa constituency he is aiming to represent. That is understandable. He has spent most of his life in Eti Osa constituency, so therefore he is quite knowledgeable and familiar with that area.

Though everyone calls him Jide, he prefers to call himself Ibrahim. He has been through the thick and thin of life. This upbringing prepared him kind of for his current challenges. It got him close to the grassroots. Many think Jide is a silver spoon born on account of his dad, and mum being rich. But he will readily tell you he is not one.

He told City People matter of factly that when he was born, his dad and mum were not rich, that they were struggling to make ends meet. His dad had once revealed how he was raised in (Isale Eko) on Lagos Island and how he struggled to make it in life. IBO re-echoed the same thing, confessing that he had seen and experienced grinding poverty in his early years.

So what is IBO’s past like? We can readily tell you he is an amiable, astute and result oriented personality. He is reputable for his relentless passion for efficiency and excellent delivery of service. IBO is focused on investing his youthful strength, inexorable energy, uncommon gift and resourceful skills towards improving the quality of life of people living in Eti-Osa Federal Constituency, and the people of Lagos.

IBO is a thoroughly groomed advocate of the emancipation of the grassroots. He has qualifications from the prestigious Kings College Lagos, B.S.C in Political Science from St. Cloud State University MN, Masters in Public Administration from Pace University New York, United States and a local government seminar from Oxford University England. His hands-on experience in banking, agriculture and political activism for social change equips him with unimpeachable leadership skills to spearhead the emerging legislative interests of the Eti-Osa Federal Constituency.

The success story of his agricultural enterprise, being arguably the largest indigenous Tilapia fish farmer in the South West Nigeria, and as an employer of Labour, is a glowing testimony to his admirable leadership quality and uncompromising ability to always deliver on his set goals in life and for humanity, and his obsession for excellence.

One of the things he has going for him is the fact that he has spent most of his life in Eti-Osa constituency, therefore he is quite knowledgeable and familiar with the area. Having interfaced and consulted with key stakeholders and other constituents, IBO has come to the full knowledge that the potential of his constituency has not been adequately harnessed. What is required is a fearless and people-driven legislator who can collaborate efficiently with the executive arm of the State and Federal Government to promote laws and regulations that will cultivate the socio-economic potential of Eti-Osa Federal Constituency and mitigate the pervading challenges of the constituents to actualize their yearnings for a prosperous and happy life.

As you go round your constituents, what has been the feedback you have been getting?

It’s been encouraging. And the ovation has been loud, even before the primaries. After the primaries, within the party we had a few rancour here and there. That has been resolved I believe we have done the needful. We have reconciled, by that I mean myself and the other aspirants. We have collapsed our structures into one and we are working hand in hand.

In your campaign leaflet, you revealed that so far, Eti Osa constituency has not realised its full potentials and that you will achieve that. How do you mean?

As a lawmaker, our core duty is to make laws but it is also our duty to speak out for the constituency we represent and that is what I represent. That is what I plan to do, to dialogue with the executive arm of government to bring infrastructure to Eti Osa and they should consider that we generate a lot in terms of GDP and income for both the State and the Federal Government. So, we need more attention, especially in the constituency where we have a lot of the less privileged. It’s about continuously engaging the State and Federal Government to come down to Eti Osa and help us. Our roads need more attention. Our drainages need more attention. And I am ready to partner with the Executive arm of government, especially the Local Government to continue to educate our people on the need to keep our drainages clean from all these self-made blockages that block them, like sachets of pure water, bottle drinks, bottled water, our garbage. When rain falls this garbage’s block the drainage. We need to start educating ourselves to live in a clean environment.

Our shore lines have been abandoned for so long. We need to start finding ways to make money from our shorelines. We need to take care of our shorelines and use that as a means of income for our Local Governments.

There is also the issue of the waves or the ocean surge. What the Eko Atlantic has done is to help us divert the Bar Beach wave that we are used to the East side of Eti-Osa. So what we need now is more than wave breakers to reduce the inflow of water especially when the ocean surges and also to help us keep water when it rains. It reduces the amount of the inflow of water and before more water comes in, the little on ground would have gone back to their space.

We have many more things we promise to do, and to continuously engage the executive arm of government. So that they can get to work here.

Your Eti Osa constituency 1 is quite large. Can you tell us the areas that make up your constituency?

Let us start from Ikoyi-Obalende, Ikoyi, VI, Takwa Bay, Ogogoro, Abagbo, Ebute Elefun, all these areas are riverine areas, some of it you can only get access to them by boat. They are Ogogoro, Takwa Bay, Ebute Elefun, Abagbo. They are about 7 villages. Then you come down to VI, Lekki Phase 1, Oniru, Ikate, Igbo Efon, Agungi, Osapa London, Ajiran, Ikota, Oluwanisola, Ajah, Igbokoshi, Ogombo, Addo, Badore, Ogunmopo, Okun Ajah, Sangotedo, Abraham Adesanya area, Majek. In the main, those are the areas that constitutes Eti Osa. The land massive. It is huge.

You have been in politics for quite some time now and with the passing of each year IBO gets better. What has kept you going, year in, year out?

By nature I am a people’s person. I love people. Like I always tell everybody, without the people around me, I am naked. My people are my clothing. I say that all the time. That is just my nature. I remember when I was growing up, I just wanted to help people. I remember at that time, the most common gesture then when you see beggars then was the hand to the mouth gesture-meaning they are hungry. I remember I used to tell myself that when I grow up I am going to be a huge farmer and I will be feeding all these people. But along the line, as I grew up, it became obvious to me that farming alone cannot solve all these problems. I told myself that I am going to become a farmer and an Economist. Later, I found out that even the Economics is more than just economics.

This was what I found out in my secondary school, when I started taking government classes. Since then I have known that one day I am going to be part of the government to contribute my own little quota to the betterment of my nearest environment. That is what has been driving me to try and impact people’s lives in a more meaningful manner. As I speak now, I do it as an individual. But as an individual I can only do so much, I can only help a few people pay their bills for a short while. I can only help people reduce their hospital bills, all these 3rd party bills that they incure, I can only do that as an individual because my own income too is very limited; it is not unlimited resources.

But being in government one can help formulate policies that will help people in the long run. For example, one of the bills that I want to propose is that hospitals and clinics should abolise the idea of having people pay for cards before they get treatment. I have seen people die waiting to get money to pay for these cards. I think that practice should be abolished so when people come to the hospital they should first attend to them and then later on find a way to sort out the bill.

Ihave plans to propose that. This is where we need government to come in becauseI also understand that as a business owner you don’t want to take somebody inand not get paid for the treatment and service. We need to sit down and sortout that issue. What is the middle ground? What is the way out?

READ ALSO: HOW I SET UP THE MUDI FASHION BRAND 25YRS AGO – FOUNDER, CLEMENT MUDIAGA ENAJEMO OPENS UP