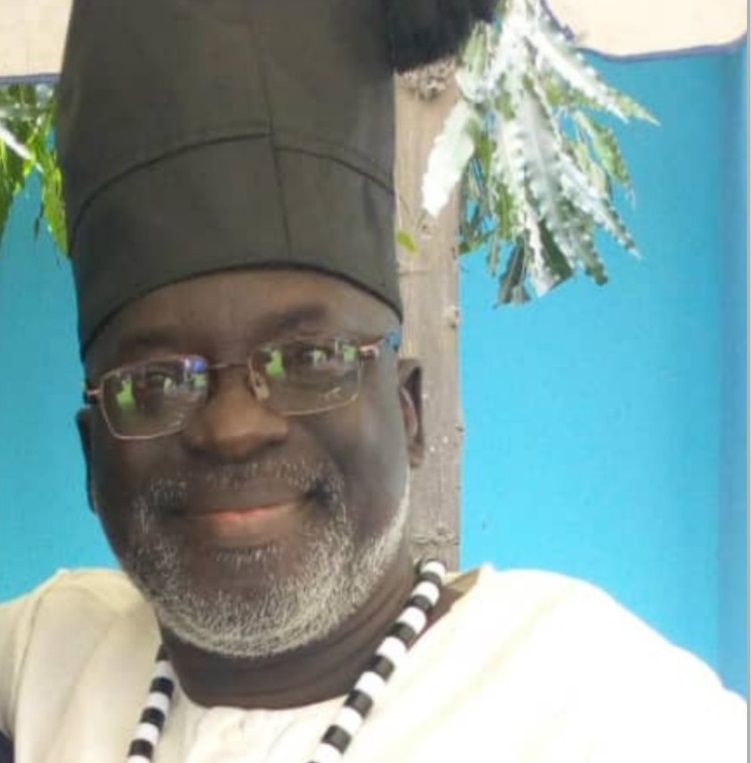 Tunji Sotimirin is a name that cannot be ignored whenever you are talking about the contemporary Nigerian movie industry, stage plays and performances. He is one of the ‘godfathers of Stage Theatre.

The legendary actor, as old as the industry has remained relevant till date, has been on top of his game generation after generation.

He came into prominence after his famous role in Death and the king’s Horseman, a TV production that was big, before many of today’s actors were born.

Let’s tell you about the Otunba who just turned 60.

OTUNBA TUNJI SOTIMIRIN, was born in Warri (Eku Baptist Hospital), 60 years ago (1960) to an accountant father, from Ijebu-Ayeke, Ogun state and his mother is from Ikere, Ekiti state. He spent his early day in Warri but later had to move to Lagos due to the nature of his father’s job. He started his primary school education in Warri, but completed it at Saint Paul’s Primary School, Ilupeju, Lagos.

He attended Lagos Secondary Commercial Academy, and did a remedial course at the Baptist Academy, Ilupeju, Lagos. He studied Theater Arts at the University of Ibadan.

He is an award winning multi-talented Nigerian actor, comedian, dancer, singer, television and radio host. Might we add that Otunba Tunji is a multiliguist who speaks no fewer than 5 major Nigerian languages fluently?

His vast experience in the entertainment industry cut across virtually all known media of information (stage, Radio and Television). He co-ordinated and performed in a recording of traditional Nigerian music, for the London based Soul Jazz Records.

As an actor, He has played lead roles and has directed many stage, film and television productions which include: Death and the king’s Horseman, Molue, a solo performance, Rhythm of Hope, Andora goes Kinshasa, The Boat, Budiso, Jankariwo, A Raisin in the Sun, What the Butler Saw (London), Belong, Beatification of an Area Boy, Dialing Love, Askari,

The Lion and the Jewel, At Peace (Republic of Ireland Tour), Yemoja, Pandora’s Box (London), The Kalakutans, and Okikiro, amongst many others.

History has it on record that Tunji Sotimirin is the first Nigerian to perform a full-length monodrama (solo play) in 1989 with his popular classic solo play ‘Molue,’ a series of comic sketches depicting the typical chaotic situation in the ram-shackled Lagos buses called Molue.

He has written many plays like Conscience, Waiting for John, Ojoro Kansulu and Mofobale (a one-man show performed at Goldmiths College, University of London).
At a point, he had a radio programme called ‘Konkere Extention’ on Unilag FM. He has three CD’s to his credit. Tunji’s voice is strong at any forum where art is discussed as a serious subject.

As a musician, he has performed in many musical festivals within and outside Nigeria. He created his own brand of music called Konkere and is the founder of Konkere Band.

He has been involved in many Music festivals within and outside the country. As a musician he created his Konkere Band, to popularize a genre of music, which sought to project Nigeria’s culture, through creativity in lyrical composition and innovative use of African percussion instruments.

How do you feel turning 60?
You know, sometimes I feel like this thing about age is a scam. Who ever invented or conceived the idea must be a gambler. I still feel very youthful, active and energetic. The only difference is that the tempo of my physical activities is not as consistent as when I was 45/50. All the same we thank God for protection and good health.

Are we doing enough in the entertainment industry to bring Stage Plays to the front-burner where it belong? What would you propose?Yes, there is an explosion of live theatre productions in Nigeria now. If not for Covid-19, theatre arenas would have been agoged with stage plays. I was actually acting in Bimbo Manuel’s Alhaji at Tera-Kulture before the corona issue interrupted our presentations.

And I also know that Prof. Ahmed Yerima had just written and directed a play titled AREMU in honour of Nigeria’s former president, Olusegun Obasanjo before the corona problem. Quite a number of people were working on new productions both within and outside of Lagos.


For example, The Crown Troupe of Africa led by Segun Adefila had just shown a preview of their new work. Kiniso Koncept led by Joshua Alabi, was working on something new. Bolanle -Austin Peters, was just rounding up rehearsals. Jude Patric-Oteh was putting finishing touches to his new work in Jos, The House of Oduduwa foundation was also getting ready to stage Moremi at the University of Lagos in April.

Several professional production outfits in Bariga, Departments of Theatre and English in our various Universities and Colleges of Education were also preparing to mount the stage for Easter celebration before the unfortunate incident of Corona virus. So you see, we have more people producing plays now. Both for commercial and educational purposes.

You dont seem to appear much in home videos. Is that a matter of choice? If yes, why?

Well, as for home videos, I have recorded a few that are yet to be shown. Actually, producers are more interested in soap operas now a days, and I have been invited to participate in a couple of them. For instance, Iam acting the role of Chief Olowo in the Johnsons.

I am also in Unbroken, my episodes are yet to be shown. I have also recorded a few ones yet to be on air. I have not been very regular in movie productions because I was out of the county for an academic research for a longtime. This has a way of affecting your constant participation.

Using Owuro Lojo (soap) as an instance, there have been very many soaps in the 80s and 90s that are way ahead what we have today. The creative, plot and narrative were almost faultless. What do you think is killing creatvity in the industry today.

I think there is so much attention on illusory and romantic attractiveness as opposed to real dramatic content with profundity. A lot of producers are swayed by the social media phenomenon where anything and everything that attracts publicity to gain popularity is acceptable. Well.. I won’t blame such producers because they need to recoup their financial investment. That is the reality of our present situations.

With your popularity and immeasurable influence in Nigeria’s entertainment industry, when and why did you pick up lecturing job?
I was nurtured in the University environment. I started my theatre career at the university of Lagos as a trainee actor under the tutelage of Prof. Bode Osanyin, Prof Akin Euba, Mrs. Uwa Hunwick, Prof. Duro Oni, Prof. Abayomi Barber, Dr. Afolabi Alaja Browne, Prof. Abayomi Adetoro, Prof Ebun Clarke, Prof Laz Ekwueme, Prof Anthony Mereni and others.

Mathew Umukoro, Hygenius Ekwazi, Zulu Sofola, Carol Dawes, Peter Brook and others. I did my phD in Goldsmiths College, University of London. So my background is both in the theory and practice of theatre and performance hence my motivation to be a lecturer.

Let’s talk about your musical group Konkere, What inspires this initiative?
The idea of Konkere music was conceived in 1984 when I was doing my Diploma program in the university of Ibadan. In fact on our Matriculation day, instead of wearing a gown, and sitting in the hall like other fresh students, I went to Mokola to buy some drums and got a group together to entertain guests at the matriculation venue.

They appreciated our performance and gave us a lot of money. From that day, it became a regular feature on campuses and at social gatherings within and outside Lagos. Konkere has also performed on several occasions at the World Music Day organized by the French Cultural Centre , the band has featured at the Muson Festival and at International Festivals in Italy, Germany, London and South Africa to mention a few.

Where do you see stage theatre in Nigeria in the next 5 years?
Honestly, stage plays has come to stay. There more awareness out there now about the relevance of live theatre in Nigeria. Corporate groups and private establishments are becoming more convinced that there is no better platform to promote their products than the theatre.

Political organizations are also investing into theatre to gain more followers hip and relevance. More writers and producers who don’t have any background in the theatre are now embracing stage productions because it is viable. The Nigerian audience are tired and bored watching television programs . They want to take their families out to be entertained.

Many more of these activities will blossom in the next five years, barring all odds including Corona virus. But let me lend my voice to the advocacy that we need more professional and secured theatre venues in Nigeria. This will encourage more investors to put their resources into sponsoring play productions and more people will also be inspired to attend theatre shows.

What’s the secret of your ever-young look?

My secret is I eat good food: All my salary is invested into good food. Vegetables, fruits, fresh fish and co. As a professional dancer, I engage in physical exercises in order to keep fit.

How do you unwine?
I watch virtually all the television channels. I also play with my family. That’s how I unwine. Thanks.

Why Top Pastors Are Calling On Govt. To Re-Open Churches