Home News Why Top Pastors Are Calling On Govt. To Re-Open Churches
News

Why Top Pastors Are Calling On Govt. To Re-Open Churches 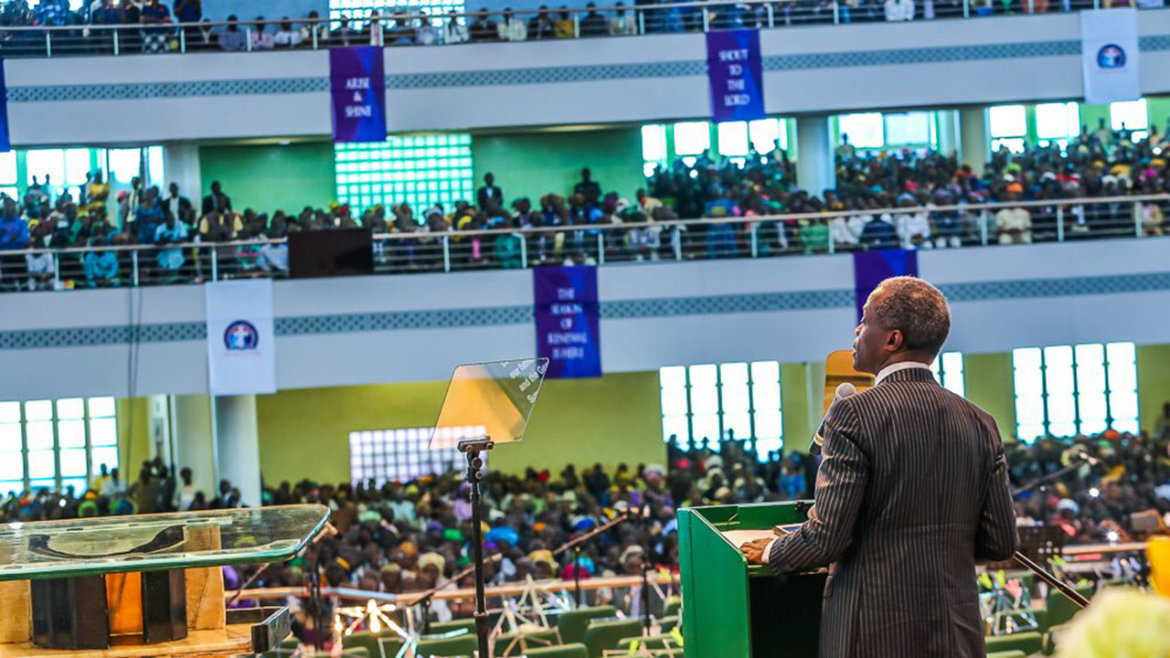 There is no gainsaying that the COVID-19 pandemic has dealt a great blow to every sector of the economy all over the world. Nigeria is also not left out of it. And the church is another money spinning and tax free sector that has also been affected by this lockdown.

The Federal Government in a bid to reduce the spread of Coronavirus placed a ban on all religious gatherings until further notice and as a result, church meetings have been limited to only online services.

So many churches who count several millions of naira from tithe and offering every Sunday now have nothing to count and have no reason to smile to the bank. In this report, City People’s TITILOPE OGUNLEYE, takes a look at how many of these churches are now faring without their weekly millions of naira. Enjoy.

COVID-19 pandemic which struck the world at large has put a lot of businesses on hold and most organizations are going through hard times. Different sectors in Nigeria’s economy have witnessed a downturn while others are struggling to survive but telecommunication, food and health products are enjoying a boom. Just like every other organization, the church too has been greatly affected and has lost several millions of naira since the lockdown.

The Living Faith Church Worldwide, popularly known as Winners Chapel under the leadership of Bishop David Oyedepo, is one of the most talked-about churches in Nigeria with her global network of congregation in over 65 countries.

The church headquarters auditorium has over 50,000 seating capacity which hosts over 100000 members in their Sunday service. It will interest you to know that Winners Chapel runs over four services every Sunday and a great number of people travel a great distance to join the service every Sunday, generating millions weekly through offering, special offerings, tithes, gift and aggressive donations.

The headquarters which is also called Canaan land is a beehive of activities and the church has chains of businesses which generate millions daily and weekly to the church.

Winnners Chapel, also runs a mini church known as cells where members in a particular location gather to fellowship and generate income for the church.

The Redeemed Christian Church of God under the leadership of Pastor Enoch Adejare Adeboye is one of the most popular and populated churches in Africa.

At the last count, there are at least about 2000 parishes of the Redeemed Christian Church of God in Nigeria. On the International scene, the church is present in other African nations including C’ote D’Ivoire, Ghana, Zambia, Malawi, Zaire, Tanzania, Kenya, Uganda, Gambia, Cameroon, and South Africa. In Europe the church is spread in England, Germany, and France.

In the United States there are parishes in Dallas, Tallahassee, Houston, New York, Washington, and Chicago and also in the Caribbean states of Haiti and Jamaica. All the above countries generates income through their weekly and Sunday services.

One of the well-known programmes of the church is the Holy Ghost Service, an all-night miracle service that holds on the first Friday of every month at the Redemption Camp at Km. 46, Lagos-Ibadan Expressway. The average headcount of those who attend the service is about 500,000.

The Holy Ghost Service now holds in different parts of the world which includes the United Kingdom, India, USA, Canada, South Africa, Australia, Dubai, Ghana, Philippines and many more. The monthly congress also generates millions of naira to the church purse. The Redeemed Christian Church of God also have chains of businesses which include a university, schools, hospitals, library and a host of others.

Pastor Chris Oyakhilomefounded Christ Embassy which is also known as LoveWorld Incorporated or Believers’ Loveworld in 1987. This mega Church which started as a prayer group now has over 145 branches in five continents of the world. The headquarters in Lagos has become a global network of churches with congregations in many countries, and approximately over 13,000,000 followers all over the world.

The church has ministries in Canada, Nigeria, South Africa, the United States and the United Kingdom. In Lagos, the headquarters has over 40,000 believers. The church is handled like a business empire. Despite many scandalous and controversial stories surrounding divorce, the church through the evangelist engage in aggressive follow up of members and that is why their population is on the increase.

The church generates income from millions of followers across the globe and has been greatly affected since the lock down.

Do you know that Dunamis International Gospel Centre, Glory Dome in Abuja Nigeria has the world’s largest church auditorium with 100,000 seaters’ capacity building?

Yes, it has a bigger auditorium than that of Winners’ Chapel. The church is pastored by Dr. Paul Enenche and his wife Pastor Becky. They both co-pastor the church. It will interest you to know that the edifice was completed in 2018.

The church generates income from offering, tithes and several donations.
The name COZA surely rings a bell. Commonwealth of Zion Assembly (COZA) is a multi-site church pastored by Biodun Fatoyinbo and Modele Fatoyinbo. It is based in Abuja, but has 5 branches, 1 in Dubai and the other four in Abuja, Lagos, Ilorin and Port Harcourt. COZA is regarded as a church for the wealthy and the show of affluence is visible.

Pastor Biodun Fatoyinbo is a power dresser and he spends heavily on luxury wears. He is regarded as the pastor for the big girls and big boys in the society. His church is well attended by crème-de-la-crème if the society. He has hundreds of thousands worshippers in their various services who donate in millions to the church.

Daystar Christian Centre is led by Pastor Sam and Pastor Nike Adeyemi. It is also one of the populated churches in Lagos with thousands of worshippers. Just like the aforementioned Pentecostal churches. They generates millions of naira on weekly basis from tithe and offering.
House On The Rock is a Pentecostal Church, with over 7,000 worshipers on Sunday mornings and several daughter churches spread

Why Top Pastors Are Calling On Govt. To Re-Open Churches was last modified: May 17th, 2020 by Reporter