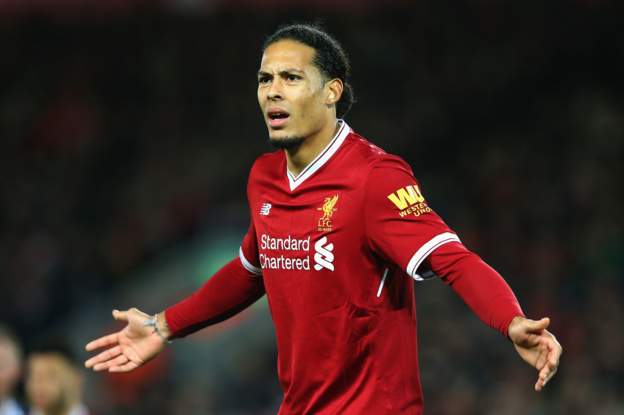 Liverpool defender Virgil van Dijk admits he would be “gutted” if the coronavirus crisis prevents fans from watching them win a league title for the first time in 30 years.

The Reds lead the Premier League by 25 points but football across the country is suspended until 3 April.

The prospect of playing matches without fans has been raised as one of a number of ways to complete the fixture list.

“No one wants to play games without the fans,” said Van Dijk, 28.

“If we won it in an empty stadium and the fans weren’t there, I’d be gutted for them,” the Dutch international told newspapers.

“Obviously, if there are no fans at Anfield, then it will be a bit of a blow.

“Until a decision is made on how we go on from here, then we just have to deal with it. But when it happens, we are still bringing the title to our fans, definitely.”

Sport is expected to be subjected to further restrictions next week with Prime Minister Boris Johnson set to announce a blanket ban on major public gatherings.

Uefa will meet on Tuesday to discuss the scheduling of Euro 2020, which is due to begin on 12 June.

The Premier League will then hold a second emergency meeting on Thursday to discuss potential ways forward in the wake of Uefa making its own plans clear.

On Saturday, Brighton chief executive Paul Barber said it is “hard to imagine” the league resuming in early April given the crisis unfolding on a global scale.

Liverpool need a maximum of two more wins to secure the Premier League and Barber said it would be “incredibly unjust” if they were not to be awarded the title.

In a newspaper column, West Ham vice-chairman Karren Brady said declaring the season “null and void” was “the only fair and reasonable thing to do”.

On Friday, Liverpool manager Jurgen Klopp said “football matches really aren’t important at all” in an emotional message on the club’s website where he urged fans to “look out for each other”.

I Will Be Sad If Coronavirus Prevents Liverpool From Winning EPL Title – Van Dijk was last modified: March 15th, 2020 by Damilare Salami