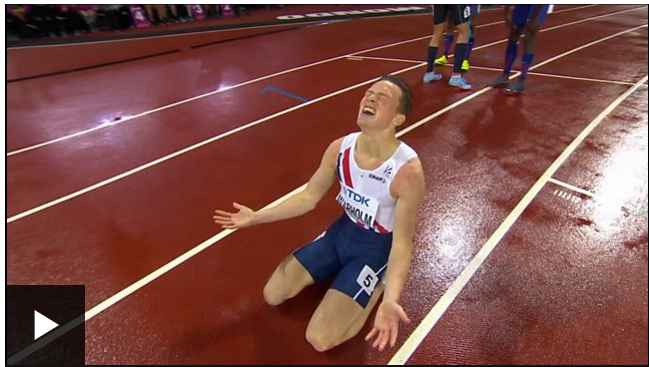 21-year-old Karsten Warholm of Norway powered to world 400m hurdles gold to light up a sodden night at London Stadium and ended his country’s 30 years wait for a gold medal in an international championship.
With Britain’s Mo Farah safely qualifying for Saturday’s 5,000m final, it was Warholm’s blistering display that deservedly grabbed the headlines, his nation’s first gold at the Worlds since Ingrid Kristiansen took the 10,000m title in Rome 30 years ago.
The 2015 European junior decathlon silver medallist defied his tender years and the experience of the men around him as he judged his effort to perfection in the most brutal of events.
As always he went out hard, but even with Turkey’s Yasmani Copello and Clement chasing him down, stayed strong in the home straight, finishing in 48.35 seconds with Copello taking silver and Clement bronze.
“I truly don’t believe it,” said Warholm. “I’ve worked so hard for this but I don’t know what I have done. This is an amazing feeling. I’m world champion, that’s crazy.”
Miller-Uibo seemed to have her own final in the bag as she maintained her lead over a fading Felix into the final 30 metres.
The Bahamian then appeared to pull a muscle, her left foot catching on the track as all her momentum died.
Francis came charging through to take advantage in a new personal best of 49.92secs, Nasser in her wake for an exceptional silver and Felix, so often the darling of these championships, forced to settle for third.