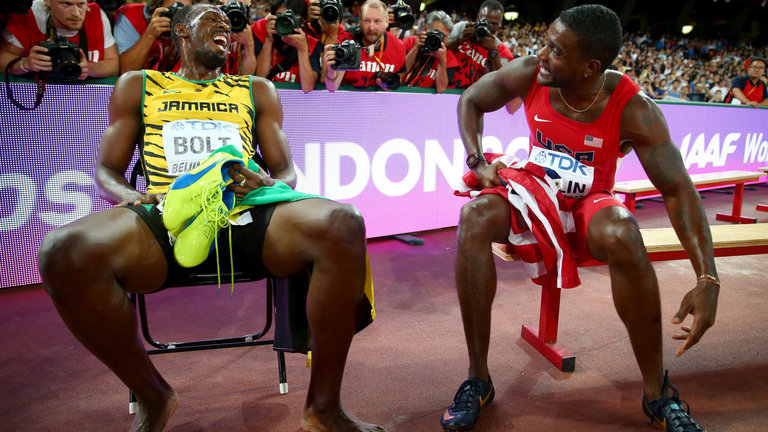 IAAF president Sebastian Coe said on Sunday that Justin Gatlin’s win in the 100 metres at the World Athletics Championships was “not the perfect script” for the sport.
American born Gatlin who has served two suspensions for doping offences, ruined Usain Bolt’s fairytale farewell on Saturday by beating the Jamaican sprint great in his final ever individual race.
Bolt came third, behind 21-year-old American Christian Coleman, whose compatriot Gatlin was booed by the crowd for his win inside the London Stadium.
“I’m not eulogistic that someone who has served two bans has walked off with one of our glittering prizes. But he is eligible to be here,” Coe, the head of the sport’s governing body, told the BBC.
“It’s not the perfect script. I thought Usain was very generous with the observations he made. That must have been a bitter event for him to swallow. He was bigger than the moment and it typifies his career.”
Coe reiterated his support for life bans for convicted drug cheats, but used Gatlin’s example to illustrate how legal systems worldwide have frustrated efforts to impose more severe punishments.
Gatlin received a two-year ban in 2001 after failing a dope test for amphetamines found in prescribed medication he had been taking since a child for Attention Deficit Disorder. This suspension was later reduced to one year on appeal.
The sprinter then tested positive for testosterone in 2006 and was suspended for eight years, avoiding a lifetime ban in exchange for his cooperation with the doping authorities.
This ban, however, was also halved by an arbitration panel in 2007.

“There have been two bans in the past,” Coe said. “One got watered down, which made it very difficult for the second ban. The second ban, we went for an eight-year ban, which would have, in essence, been a life ban. We lost that.”
Efforts to impose lengthy suspensions on doping offenders have often been overturned in courts or by arbitration panels, with appeals sometimes citing inconsistencies with the World Anti-Doping Agency (WADA) code.
WADA only updated its code from January 2015 to allow a four-year ban for first-time offenders, up from two years.
Following Gatlin’s victory, Jamaica’s prime minister Andrew Holness said he wanted lifetime bans introduced to fully eradicate doping.
“So would I (like to see lifetime bans) and so would the majority of our sport,” Coe said. “I’m not going to close the door on lifetime bans but we’ve constantly tried it and lost it.”