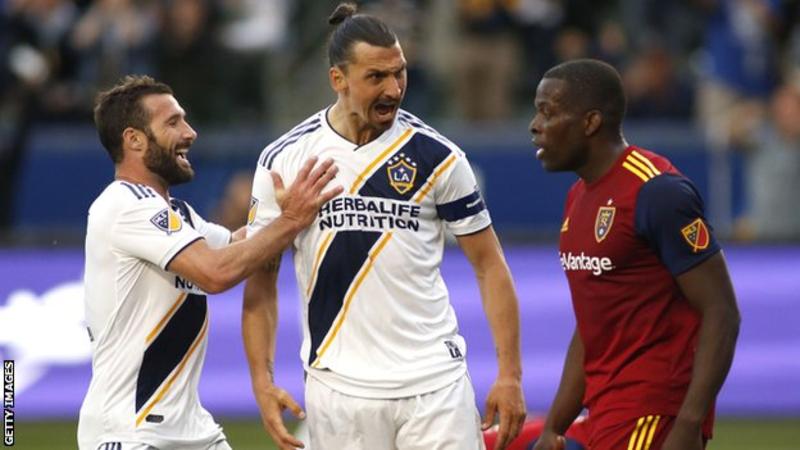 The pair clashed twice before Ibrahimovic scored the 78th-minute winner and celebrated in Onuoha’s face.

Onuoha, 32, says he rejected the Swede’s apology in the dressing room.

“Over here it is just a show for him. A lot of people are scared of him – but he is just a mere mortal,” he said.

“First, he was very arrogant. Secondly, I thought: ‘What is this guy playing at?’

“This is not the way you are supposed to do it, especially someone who is meant to be the face of the game here and the game globally.

The first flashpoint came in the 60th minute when 37-year-old Ibrahimovic was booked for dragging Onuoha to the ground by his neck in an off-the-ball incident.

Onuoha said the former Manchester United striker then made the threats to him following another challenge shortly afterwards.

“This time he hit me on top of the head. I was again thinking: ‘What is going on here?'” Onuoha told BBC Sport.

Once the game was over, Ibrahimovic came into Real’s dressing room, later telling reporters: “I went to shake their hands, no big issues.”

Describing the moment, Onuoha, who joined Real in 2018, said: “He started coming towards me and said, ‘have you calmed down, big man?’

“The amount of disrespect he showed me on the field – I want to let things go, but I can’t let them go, especially when it is so raw.

“The way he came in was almost arrogant in itself, trying to be all friendly. But this is the guy who fouled me on the field, tried to embarrass me when they scored, then he comes in to try and allegedly apologise.

“I do not think he is a good person, so I am not going to offer my hand and, in no uncertain terms, I told him to get out.”