Home News If Govt Is Not Careful, A Greater Problem Is Coming – CELICA Church Of Christ Founder, Prophet ADEONIGBAGBE
News 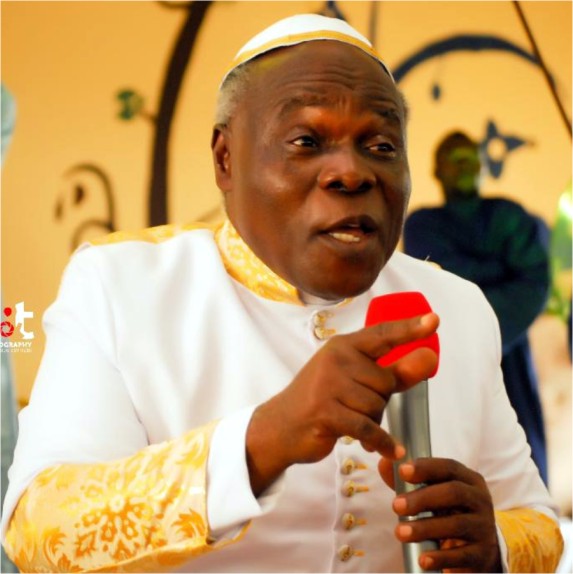 A couple of months ago, City People had an exclusive and enriching interview with the very amiable and hugely respected founder of Celica Church of Christ, Ibadan, Prophet Emmanuel Adeonigbagbe. In the interview, he did reveal that a looming darkness hovered around the country and that the nation is being controlled by occult forces. Those who know the prophet well enough  will tell you he is one man of God who does not speak unless he has heard from God. He is a man who is always very careful with his utterances and will never be caught making unguarded statements. This is one of the reasons why he has remained one of the most respected religious leaders in the country today. And his many prophecies over the years that have come to pass are a testament of his genuine relationship with the Lord Almighty.

In this interview with City People’s Senior Editor, WALE LAWAL (08037209290), Prophet Adeonigbagbe reflects on the present situation in the country and what the Lord is telling him at this very critical time in our nation’s history.

In your last interview with us, sir, you indeed spoke of looming darkness, were you referring to these killings that have been taking place all over the country since last week?

During our prophets anniversary in August 2020 a revelation came to me to alert the authorities and the nation to pray against looming darkness hovering over Nigeria and also in the last week of September God told us to pray against bloodshed in the country.

On the looming darkness revelation, something greater is still coming unless the government takes genuine steps to avert it.

We have been conducting prayers  faithfully during our vigils and services as intercession for the country.

For over 20 years the Lord had been warning our leaders on the steps to take to prevent crisis in the country. Failure to obey spiritual directives had led us to this point.It is rather unfortunate that all these crises and occurences could have been avoided if those in power listened to the voice of God.

What is responsible for this, sir, is it our sins and God is now angry with us?

God is not waging war on us but we, particularly those in authority, are waging on ourselves because of spiritual disobedience.

Nigeria is polluted with the blood of the innocent and the land is crying out. You need to read Numbers 35 vs 31-34 to understand what I am saying.

It is also rather unfortunate that our leaders do not depend on God for guidance and wisdom in piloting the affairs of the nation.

In my interview in Tribune newspapers that is why I said Nigeria is in spiritual bondage. For the past 28 years we have been sending spiritual messages and warnings to those in the helm of affairs but they always relegate God to the background. All the prophecies, spiritual messages and warnings are in the public space. God loves Nigeria but it’s leaders have been disobedient to God. That is the genesis of all these crises we have been experiencing every year since 1992.

What is your view on the current situation in the country?

I don’t condemn the youth for their peaceful protests they are well within their rights and I am in support of them. I am of the opinion that it is the government’s duty to provide adequate security for protesters.

I say no to injustice, bad governance, corruption and nepotism.

I observed that during the protests there was no political, religious and ethnic differences among our youths. Unity among Nigerians is what is needed to move our country forward. I have always emphasised that creation ( humanity) comes first before religion and ethnicity because in the book of Genesis 1:26 “ God said, ‘Let us make man in our image, in our likeness”.

Who should take the blame for this crisis?

The government generally because they were not alive to their responsibilities but at the same time the whole society is culpable one way or the other for the rot in the system.

During this protest in some States I saw some people disturbing public peace and extorting money from members of the society. If you say you are fighting for a just and better system why should you do this?

Some youths can’t even be trusted with leadership positions as they will exhibit the same negative tendencies being shown by the current ruling class.

I know the government has failed the youths in many aspects; while some youths have found productive and legitimate means of survival; some youths have become involved in various criminal vices which does not augur well for the society.

We have to pray to God to give us youths who are ready to serve the nation in various capacities in government in order to bring about the desired change.

When the country is confronted with situations like this, what role do religious leaders like you play?

As spiritual and religious leaders we must be the conscience of the nation and speak out against the ills of the society, injustice, nepotism, corrupt practices,social inequality,neglect of the masses,bad governance etc. I, as a prophet of the living God, have always spoken out whatever the Lord tells me without fear and favour to those in the corridors of power. Spiritually we have been making intercessions to God to look with mercy on our dear nation in order for the various crises and challenges to come to an end.

Do you see this possibly leading to a bigger problem for us as a nation?

With or without these agitations Nigeria is in crisis already.

The polity is saturated and if not nipped in the bud it will escalate to something greater. I told you in the earlier interview that a spiritual revolution is coming.

There have been various spiritual messages to this effect from God through me.I recall in 2013 where the Lord Jesus used a word in the prophecy for that year “Nigeria to be or Not to be”. As stated in my earlier interviews with both the Nigerian Tribune and City People Magazine the permanent solution is to go back to God for guidance and direction. The formation of a spiritual council made up of strictly prophets of both the Islamic and Christian faiths will provide guidance to political leaders on policies and actions of government.

Note my words strictly prophets particularly the unknown ones who will speak truth to power and have the fear of God in their hearts.

What would you advise as the way forward, Sir?

The agitations of the citizens must be sincerely addressed and there must be deep institutional reforms across all sectors.

The citizens must be carried along in the policies and actions of government to build a better society for all.

Politics must be service to the people and not a means of diverting public resources into private pockets.

Spiritually, the leaders of the country, past and present, must be courageous to admit their mistakes, seek forgiveness and return with a sincere heart to God for guidance in piloting the affairs of the nation.

READ ALSO: REVEALED! THE TYPE OF YAM THAT MAKES YOU HAVE TWINS

If Govt Is Not Careful, A Greater Problem Is Coming – CELICA Church Of Christ Founder, Prophet ADEONIGBAGBE was last modified: October 28th, 2020 by Wale Lawal