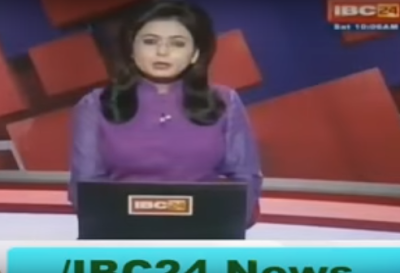 Supreet Kaur, a news anchor with IBC24, was reading the morning news bulletin on Saturday, when a reporter called to give breaking news about a fatal car crash.

As the reporter gave details, the anchor realised then that her husband was one of the victims.

The reporter did not give the names of the victims but reported that three out of the five people involved in the accident died and also gave the name of the car, the location where the accident occurred, and description of the dead.

One of the victims was Harsad Kawade, the newsanchor’s husband, and Supreet knew instantly that her husband had died. The moment Supreet found out, her voice shook but she quickly comported herself and continued the news report.

“For a moment her voice trembled, but she collected herself and carried on reading the news till the bulletin got over 10 minutes later,” Ravikant Mittal, IBC24’s editor-in-chief, said Sunday.

After the news broadcast, Kaur reportedly left the studio and finally broke down in tears. She called the reporter to get more details from the accident site before informing her family about it. Supreet and Harsad had been married for just over a year and lived in Raipur, Chhattisgarh’s capital.

People across India are praising the popular anchor for her composure and a number of them took to social media to compliment her for the level of professionalism she displayed. The brave anchor has been working with IBC24 since its inception nine years ago.

Indian news presenter learns of her husband’s death while reading the news on Live TV [WATCH] was last modified: April 10th, 2017 by Reporter

Pope Francis plans to visit Egypt this month despite bombings