Why Many Teenagers Are Hooked On Blood Money Ritual 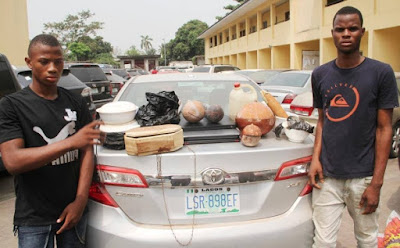 The killing for ritual has become very rampant and worrisome among the youth who are still in their teens.

The killing of a girl identified as Rofiat by her boyfriend and three others at the Oke Aregba area of Abeokuta in Ogun State a few days ago is an eye-opener for every parent or guardian.

It was reported that Soliu, who was the boyfriend of Rofiat had, with the aid of his friends strangled her, cut off her head and burnt same in a local pot, purportedly for money ritual.

Luck ran out on the teenagers when a local community guard, Segun Adewusi, sighted their activities and reported to the police at Adatan.

These are teenagers in their 17-year! It is the same set of teenagers if succeeded will call themselves ‘Yahoo boys’.

Soliu, Rofiat’s boyfriend, who initially absconded was later arrested by the police.

According to the Ogun Police Spokesperson, Abimbola Oyeyemi, the boys have all confessed to the crime, claiming they planned to use the burnt human head for a money ritual.

In the wake of the heinous incident, Nigerians who could not hide their disdain for the teenagers’ actions took to social media to express their worries.

WHY BLOOD MONEY IS RAMPANT AMONG YOUTHS

One of the reasons why blood money is rampant among the youth nowadays is the influence of social media. What do we mean?

City People findings revealed that many of these young teenagers learn most of this act online.

Let’s tell you what they do there. The brain behind these accounts calls himself a Herbalist. And he constantly posts how to make the youth rich by following his procedures. There are various types of instructions that his younger followers follow to commit this heinous act. Some of the posts talk about how to become rich by following this step. And some of these steps includes compelling them to kill and all sorts. This is where most of them learn these tricks and it’s becoming more and more worrisome.

The 17-year-old Soliu went on Facebook to search for “how to make money ritual”, in his own words. Even if Facebook produced no result, he might have very likely gone to Google to search for the same thing.

Why would a young lad go on the internet to search for how to get easy money through diabolical means? The desperation of today’s youth is worrisome and they believe anything that can quickly make them millionaires, forgetting everything is a procedure.

While being paraded, he confessed that he typed “how to make money ritual” on Facebook and got the details, adding that the link instructed him to behead and burn a female skull in a local pot.

A few months before Ayodele’s confession, ace Nigerian movie star, Yul Edochie, popularly known for his roles as an occult member cried out to young people motivated by his ‘ritualism-themed’ movies that he was just a very good actor and not an actual ritualist.

The actor, due to the overwhelming messages received on a daily basis from young people seeking to make quick money through fetish and harmful means, coupled with the scourge of ritual killings that has assumed an alarming rate in the society, was forced to make a declamatory announcement to the general public.

Yul Edochie, in his statement, noted he is only an actor that acts according to storylines given to him, and that doing money rituals in the movies did not mean he does in real life.

Interestingly, Yul is not the only actor who has publicly disassociated himself from ritualism and its consequences.

Another prominent actor who towed that path is veteran actor, Kanayo O Kanayo. Contrary to the allegation of being a ritualist due to the roles he plays in movies, he clarified on social media in 2021, that he only interprets roles in movies and is not an actual ritualist.

Undoubtedly, Nollywood films with their themes and scenes of ritual murder, magical and spiritual powers have contributed to the prevailing belief system that wealth can be made through ritual killings and dubious kidnapping.

PEER PRESSURE AND THE ECONOMY IS ANOTHER REASON

Youths are also being forced into bloodsucking rituals for greed and unnecessary pressures from their peers, and also personal life choices.

Even though some parents are far from sensible, how can a child you send to school bring home a car and keep sending you money and you feel okay about it? I’m not writing to support such parents.

A big reason is the peer pressure from their friends and associates, which tempts them into believing that there is something better they can acquire through these practices. This includes wealth, job promotion, entrance into good schools/colleges.

Religious leaders contribute to the trending ritualism more than the parents. Suppose all church clerics fail to accept youths with no visible source of income but with luxuries into the church. A pastor worships young rich ones more than the broke ones for pecuniary reasons. Even if they are not ritualists, there are forms of inferiority complex that it sends to the young ones who do not receive the pastor’s good service.

Do not let us talk about the “Muslim” clerics. They are worse and have contributed directly to this. They are the ones the young ones patronize for this evil act.

It all boils down to the government. The Nigerian government gives enough space for immoralities to blossom. A simple government policy could reduce it. How about a public execution of whoever is found guilty of using fellow humans for rituals. This will send a message to existing and upcoming ritualists to cease or face the same fate when caught.

The agency that deals with the orientation of young ones is practically dead. The orientation agency needs to run a public awareness program for the youths about rituals and show them what might happen if they fail to heed the warning.

Why Many Teenagers Are Hooked On Blood Money Ritual was last modified: February 7th, 2022 by City People

Those Behind The Anti Sanwo-Olu 2nd Term Campaign