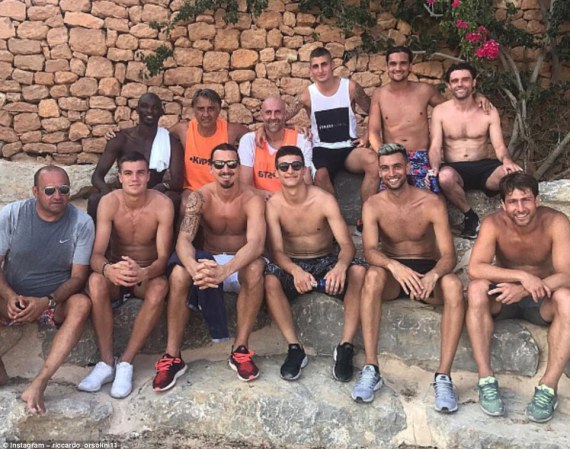 Zlatan Ibrahimovic has taken a step closer to returning to the football pitch as he enjoyed a kickabout with former PSG team-mates while on holiday in Ibiza on Monday. Ibrahimovic, who spent four seasons with the French giants, was pictured on Instagram hanging out with the likes of Marco Verratti and Maxwell.

He is joined by Zoumana Camara, Donato Di Campli, Verratti’s agent, Ascoli striker Andrea Favilli, Riccardo Orsolini, a young Juventus winger, and Javier Pastore.The Swedish striker may not have a club yet after being released by Manchester United at the end of the season, but he is determined to find a new home.

The 35-year-old suffered a horrific knee injury in United’s Europa League quarter final win over Anderlecht in April, forcing him to miss the final weeks of the season.

After scoring 28 goals in 46 appearances and starring in the EFL Cup final win over Southampton, it marked a disappointing end to a prolific debut campaign in England.

Injured Zlatan Ibrahimovic Hangs Out With Former PSG Teammates In Ibiza was last modified: June 27th, 2017 by Arinze Ago