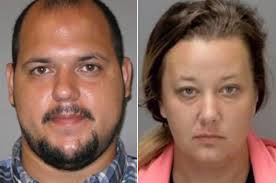 A couple locked their five young children in a ‘dungeon’ for days on end while making them wear diapers and beating them with a nail-studded plank, police say. Yenier Conde, 32, and his wife Sarah, 28, are alleged to have abused the five youngsters by screwing the door of a bedroom with boarded-off windows shut. The pair, of Lansing, Mi., then left them without food or a toilet for ‘a bunch of days,’ according to one of the children.

Yenier Conde is accused of locking his five children in a windowless dungeon for long periods of time without food or water (Picture: Michigan Department of Corrections) Sarah Conde is also accused of abusing her children, and is even said to have fired a gun at her six year-old daughter on one occasion, only for the weapon to jam.

Police were told how they had to wear diapers while in the room one cop likened to a ‘dungeon’, with four of the children – who are now aged six, seven, nine, 10 and 11 still not toilet-trained now, police say. The children are alleged to have been abused between 2011 and 2017, with the Condes also beating them with a piece of wood studded with nails. Police said that the Conde’s second oldest child, a ten year-old boy, was successfully treated for neuroblastoma cancer as a baby, the Lansing State Journal reported. But his parents are alleged to have kept him from follow-up appointments.

They are futher accused of sending him to school without changing a dirty diaper that the cancer treatment had made it necessary for him to wear. That child also needed a leg brace and specialized shoes to help with his walk, but was only fitted for the aid once. His parents failed to take him for follow-up appointments that would have seen the device adjusted as he grew, meaning that he suffered severe pain and was prone to clumsiness, it is claimed. The boy’s mother is said to have told him that ‘If he has another accident, he would be put in a garbage truck.’ The abuse is said to have happened at the couple’s home in Lansing, Mi. On another occasion, Sarah Conde is said to have threatened her brood with a gun after one of them flooded a bathroom – and even fired it at her youngest child, only for the weapon to jam. The oldest Conde son said: ‘She almost shot us. She made us stand in a line. ‘She was laughing with her gun. She was about to shoot us.