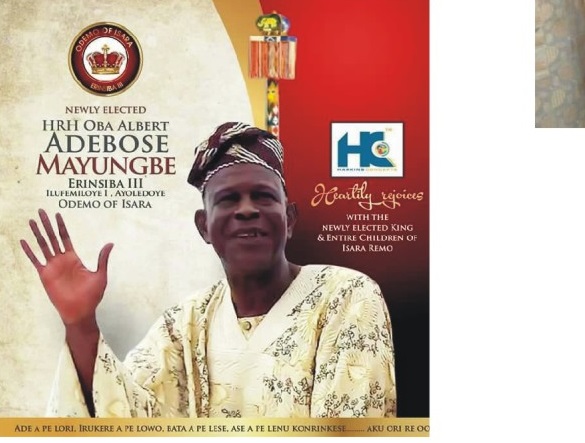 Indigenes of Isara Remo are in a happy mood right now. It is because of the announcement of  a new Odemo of Isara. The new Odemo elect is His Royal Majesty, Oba Albert Adebose Mayungbe (Erinshiba III). He has been given an approval by the Ogun State Government via a one page letter from the Ministry of Local Government & Chieftaincy Affairs on Monday 23/04/2018.

He is currently undergoing traditional rights. The coronation ceremony will be coming up in a few days time.

What delayed the appointment of a new Odemo all these while is the prolonged court case.  Since 2007, the stool of Odemo has been vacant. ERINSIBA AYOLEDOYE ruling house is the next ruling house to present the king according to sources.

But it soon turned into a big legal issue and the court decision was what Isara people had been waiting for.

In 2015, youths of Isara made effort and protested to know the reasons for the long vacancy. All the efforts by the youths,  created a  starting point for the elders by registering into them a sense of  a way forward to making sure an Odemo emerges.

On the 29th of March, 2018, the final court judgement on the obaship issue was delivered and the prince who emerged   new Odemo-elect from the  court is PRINCE ALBERT ADEBOSE MAYUNGBE. Right now the people of Isara are very happy that Isara is at long last going have a king after a very long period of time.

A mamoth crowd welcomed Oba elect Adebose Mayungbe. As he went around the town on his way back from court, he branched at many places like the Seriki’s house, and Chief Olisa of Isara’s house. In front of Lisa Onamuyiwa’s house there was a shower of rainfall which made everybody realise that it was a tide of change and a new era.   Why the stool was keenly contested was because of the importance of the position of Odemo of Isara in history.

According to an online website called Aiyekooto Ogun, Isara has a rich history. In history, Adeyemo Ode Omo Ooni, an Ife Prince was the founder of Isara Remo. Isara is one of the first Remo mother town to have settled in this settlement called Remo. Isara is the second largest town in Remo coming after Sagamu!

Over 10 years ago, the seat of the traditional ruler of the town had been vacant following the transition of late Oba Engnr. Adebayo Idowu Onadeko(Ogunsere Gbuko II) in July 2007.

Let’s recall Historically that the first Odemo of Isara is Oba Adeyemo Odemo who was the founder of Isara Remo.

He had 11 children both male and female. Historians of ancient time revealed that, a house is viable of having four angles, in lieu of this fact there was gazette among Adeyemo male offsprings; ADENIJI, ADENIYI, ADEBIMPE, ADEGOKE.

Therefore after the demise of the first Odemo of Isara, the children of Adeyemo have been coming one after the other to take turn as rightly entitled to the stool of Odemo.

His first son, ADENIJI was the next Odemo after Adeyemo following the consultations made by elders. They met with him and said “IWO GAN lokan lati joba” that is where the ruling house (ILE IGAN) emanated from till date.

Next to emerge was  ADEGOKE POKE BI OWULA, OMO TOJU IYA RE JOBA.

From these ruling houses in history, some have  presented candidates to rule Isara thrice, 5times, 6times and some even once.

From the above 6 ruling houses, there has always been rotation among the ruling houses after any ruler goes into transition.

Note also that, in the history of Yorubaland, when  there is any talk about towns with  original crown, its not common everywhere, ISARA is one of the towns in Yorubaland blessed with AUTHENTIC TRADITIONAL CROWN (ADE ISEMBAYE/ADE OWURO).

There comes a king that is very famous in the land known for his excellent hunting of wild animals just like their father… POKE II.

This Poke ruling house is of great reference because, lets recall that Adeyemo, the great hunter and founder of Isara during one of his hunting expeditions,  hunted for his 5th elephant beside OKUN town. This is the period when ADEGOKE POKE was born. Justification to this history is the evidence of the 5 elephants in the front of ODEMO ONOBAJO (Poke ) palace. Our elders because that palace is no more there. Though I asked my grand-father and he verified it yes!

Do you know the reason why we refer to sons and daughters of Isara as “Omo Afotamodi” We can tell you.

In the ancient times, there was war around Yorubaland, for war not to wage in to ISARA, the founder made consultation to IFA…

Ifa instructed him to use stone to build big fence around the town with sacrifice. This was made possible through sons and daughters of ISARA and residents. This is the reason why we refer to us as “Omo Afotamodi kogun ma wolu” till today. Its not in history that War has invaded Isara before, instead, Isara served as accommodating abode for refugees whom war invaded their towns.

Poke Onabajo III was the reigning Oba that many elders in Isara today can say they met on the throne.

The likes of Sir. Olaniwun Ajayi also confirms that. He was the Oba he met on throne… POKE III reigned from 1914 – 1941.

Although, Oba Onabajo had no formal or western education, it is said that he was very sagacious, shrewd and patriotic. It was during his time that the old township roads were made under the direction of one Pa. Obafemi who was the Oba’s effective road overseer. In his time, proceeds from the sale of communal lands were used to maintain the rest house and the Police barracks and was used towards the construction of Isara township roads.

Oba Onabajo was a farmer with specialization in cash crops. Consequently, most of the time, he was on his farm somewhere outside the town.

Alaiyeluwa Oba Samuel Adetayo Akisanya, Afonlade II (1941 – 1985) succeeded Oba Onabajo, Poke III. Oba Akisanya was the first literate Oba that Isara had. There is something significantly important to Oba Akisanya’s credit which was never so before his reign. It was He who raised Isara from obscurity to the glare of publicity and national recognition by the fact of his own popularity. Oba Akisanya was a man of engaging personality and engaging presence. In his time, he was one of the best dressed men in Yorubaland – either according to English custom or Yoruba culture and tradition.

He was a civil servant and had reached the pinnacle of his career before he ascended to the throne. Oba Osideinde was a lawyer with Federal civil service.

He was a civil servant and had reached the pinnacle of his career before he ascended to the throne. Oba Onadeko, a distinguished engineer, was a senior civil servant and controller in the Federal Ministry of works.

ISARA Remo In OGUN State Gets New King! was last modified: May 13th, 2018 by Online Source