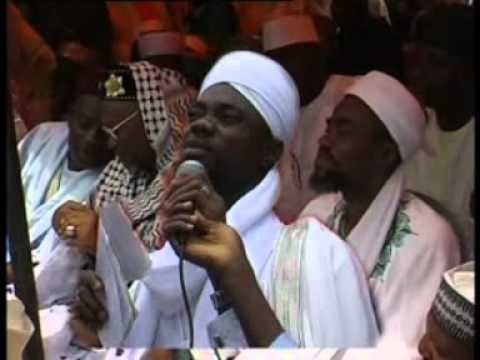 If there is any Muslim scholar or Sheik, who is popular among the high and mighty in Nigeria, it is Sheik Suleiman Farouk Onikijipa. He is one of those whom the rich and mighty in Nigeria rush to when they want a Muslim scholar to intercede for them when they are seeking Allah’s favour on issues that are bothering them. Just as Christians employ their G.O as their mediators in seeking God’s favour, Sheik Farouk Onikijipa is regarded blessed with aura of access to Allah.

His house in Harmony Estate at Olowo-Isheri  always plays host to a large number of  Nigeria heavyweights, who come to  consult him on spiritual issues. How did he get this special spiritual power you may ask? May be we should tell you that he is one of the top Nigerian Muslim scholars who never joke with “Aluwa“. Aluwe is the special prayer that is done in seclusion for many weeks, months, or years. The person in Aluwa will not during the duration of the prayer see people, Sun or Moon. Sheilk Farouk Onikijipa doesn’t joke with “ALUWA“. He has been doing it right from youth  and it has made him an “apple of God’s‘ eyes“.

Mostly before the holy month of Ramadan, many people used to  travel from far and near to Harmony Estate for the daily Ramadan lecture, called Tazril as they are sure the Sheik will give out not only  soul lifting sermon, but many special prayers which many could   to seek favour from Almighty Allah.

Not only is Sheik Farouk the Mallam of many powerful men, many governors and politicians are so close to him. He Is The Spiritual Father  to many celebs and socialites.  Perhaps, what many like about him is his down-to-earth nature. Despite his connections, he has no air around him. Sheik Farouk simplicity is second telling. A great orator, who preaches with humility. A public commentator and spiritual leader through whom hundreds of thousands ascend spiritual heights.

Aside that he was born by a powerful Sheik in Ilorin, he also went to seek knowledge, which has broadened his horizon. Perhaps, we should tell you what you have probably not read about this respected man of God, who is well loved among many Muslim faithful.

Sheikh Sulaimon Onikijipa on 25th February, 1962, was born to the Onikijipa family by Alhaja Aminat Faruq; the daughter of Fadilat Sheikh Sa’adullahi (the Imam of ancient Okekere Mosque in Oke-male, Ilorin) and Sheikh Umar Faruq, the son of Sheikh Abdullah Onikijipa and grandson of Sheikh Muh’d Qasim Onikijipa a son of Sheikh Muh’d Na-Allah of blessed memories), who migrated from the Kano and stayed in various places before he finally settled in Ilorin in the early 19th century.

Sheikh Sulaimon started his search for knowledge under the tutelage of his father, where he was taught how to recite the first chapter (Surah) of the Holy Quran. Soon after he proceeded to another Islamic foundation (informal) school to further fortified his basic learning’s under the supervision of a renowned scholar Sheikh Zakariyah Ataragba of the famous Agbaji quarters till about 1979 when he sought for permission and blessings of his teacher and spiritual head to grant him leave to enable him further his Islamic education haven mastered the basic discipline (Tarbiyah) in the Quran.

Fadilat Sheikh Adam Abdullah Al-ilory (the founder and proprietor of Arabic training center Markaz Agege Lagos), a renowned and respected scholar worldwide, requested that Sheikh should proceed to his centre (Markaz) to further  his education. This was owing to the closeness of the two and perhaps because of the insight of Sheikh Adam into the potential of the talented Sheikh. Thus, Sheikh Onikijipa from 1983 till 1986, underwent all the rigours and  challenges of studying at  (Markaz). In 1986, Sheikh sat for his final test and brilliantly completed his Arabic and Islamic education.

After sheikh’s graduation, he went ahead to deepen his knowledge in the Sufism. Despite the fact he was born and raised by a Sufist, he did not stop at that level as he further his research in the oneness of Allah (Suffism Doctrine) from scholars within and outside the nation before he finally settled with Fadilat Sheikh Abubakar on Mohammed Almiskinubillah, a well recognised suffist, an indigene of Ilorin, in Ile-Olowo, Pakata who  reside in Lagos. Sheikh stayed and remained a  follower of Abubakar till death and received blessings from him owing  to his honesty, obedience and sincerity. Today Fadilat Sheikh Sulaimon Faruq stands tall among his contemporary, as he has an intimidating credentials. Today he is a Doctorate degree holder in Human Services, from Columbus International University, Neutron, England, 2005 and also awarded a Doctorate Fellowship by the Institute of Religious and Behavioral Education, Lagos, Nigeria, 2007.

He also has a Diploma and Higher Diploma in Islamic Religion from the Institution of the Religious and Behavioural Education Lagos (1998-2002), Bachelor Degree in Islamic Studies from the Pebble University, Australia (2007) and a host of other certificates.

Few months ago, Sheik Farouk Onikijipa was asked how he felt that most prominent Nigerians come to him for spiritual prayers and assistance, this highly reserved man of God explained that the question was hard for him. He said: “ Do you know that, that question is hard to answer? Infact, I believe the people, who are coming to me know best why they are coming. How does he feel about this? Well, when Allah is using you for something, yours is to ensure that you don’t fail Him. And if things are going well for you while doing that, then you must continue to offer praises unto Him.

With additional information from Almanny.

Why Celebrities Rush To Sheik FAROUK ONIKIJIPA For Prayers was last modified: May 13th, 2018 by Abiola Orisile