IYALAJE OODUA: I’M AWARE OF MY DUTIES AND I SHALL DELIVER OPTIMALLY, TOYIN KOLADE PLEDGES 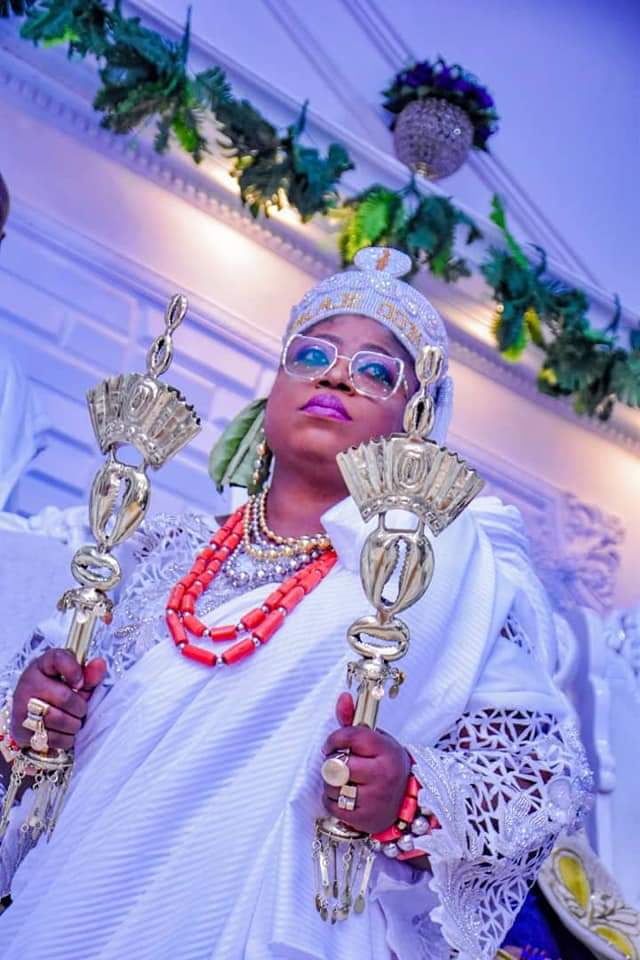 The newly installed Iyalaje of Oduduwa Race worldwide(Iyalaje Oodua) Princess (Dr.) Toyin Kolade, on Saturday stated that she is not unaware of the huge responsibilities and roles attached to her latest status, promising to perform optimally towards wealth recreation as well as human development.

“Through my close relationship with the Arole Oduduwa which I hold in a very high esteem, I have always been close to the traditional institution and I am glad to state that I have learnt a lot enough to last me a lifetime.

“Let me be specific now, my announcement in itself was done traditionally and that was the start of it all fe months ago.

“Upon my entry on Thursday evening, I was received at Ilero spot at Iremo road, Ile-Ife by the cultural women (Obinrin Ilero) and the Ooni’s traditional aides (Emeses) where the opening rites were performed before we walked to the palace to pay traditional oobeisance to the Arole Oodua before taken to the sacred Yeyemolu well for blessings.

“Today, Saturday 17th July 2021, we opened the day with a procession of Isoros and Iyalajes of different markets to the AJE temple at Oja Ife (Oja Ejigbomekun), where I joined them in company of Emeses, seven horses and my distinguished guests and well-wishers.

“Right there, I was dressed traditionally as the Iyalaje Oodua and fortified for the tasks ahead, after which we returned to the palace and we were received at the palace’s entrance (Enugeru) by Ife High-Chiefs who led me to the Temple of Wisdom (Ogun Laadin) within the palace courtyard for further blessings.

“Am happy to inform you that I got my installation leaves (Ewe Akoko) at the Temple of Wisdom, before being brought before my father; Arole Oduduwa for formal pronouncement as the Iyalaje Oodua. I am so humbled and I promise that I shall justify the basis for my appointment and installation.” Iyalaje Oodua said.

In his remarks, Ooni Ogunwusi who doubles as Co-chairman, National Council of Traditional Rulers of Nigeria(NCTRN) revealed that the selection and installation was purely based on merit, especially because of the sensitivity of the title.

“We exercised a lot of caution because Aje is a big deal in Oodua land. It started here in Ile-Ife and then spread beyond, so we are reawakening it’s spirit particularly now that the economy is in a bad shape.

“Princess Toyin Kolade is a successful business woman who is prominent for spreading wealth through giving even from her personal earnings, this is one among several countless enviable human qualities upon which she is being installed today as the Iyalaje Oodua.” The Ooni noted.

The event which was well attended by top dignitaries including the Executive Governor of Kogi State, Alhaji Yahaya Bello who was represented by his Deputy, Edward Onoja, also had traditional rulers like Olubadan of Ibadan, Olowo of Owo, Alara of Ilara-Epe, Ajero of Ijero Kingdom, Oore of Otun Ekiti, Deji of Akure, Dein of Agbor in Delta state. Prominent women like the wife of the Osun State Governor, Alhaja Kafayat Oyetola, Chief Mrs Olufunso Amosun, Erelu Abiola Dosumu, among others in attendance.

The grand finale of the history-making event held in the 3,000 capacity Meeting Incentives Conference and Event (MICE) Centre branded ‘Ojaja Arena’ within the premises of the newly commissioned Ife Grand Resort and Industrial Park, where guests were entertained by the ace Fuji musician, Alhaji Wasiu Ayinde, popularly called K1 De Ultimate in the presence of other dignitaries like Aare OnaKakanfo of Yorubaland Chief Gani Adams, Chief Femi Fani-Kayode, Basorun Dele Momodu among others.

IYALAJE OODUA: I’M AWARE OF MY DUTIES AND I SHALL DELIVER OPTIMALLY, TOYIN KOLADE PLEDGES was last modified: July 23rd, 2021 by Reporter