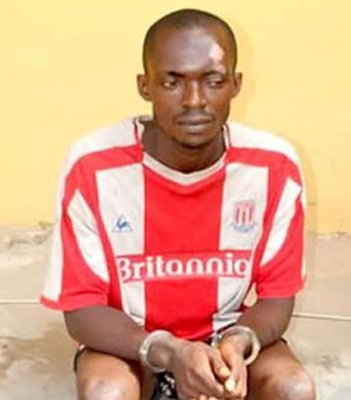 A trained vehicle panel beater in Abia state, Uche Udoma who was arrested by the Umuahia Central Police, said he had been without work for a long time, hence resorted to robbery to raise money in order to save his son who was seriously sick.

“I’m a car panel beater and I have not done any job for some time now, even when my son became sick and was hospitalised and I needed some money to pay his bill.

“That was what led me into stealing. I broke into my neighbour’s house and stole her Plasma television, but I was caught in the act and the television set was collected back from me.”

He was arrested by operatives of the Anti-kidnapping Unit attached to the Umuahia Central Police Station after they received a distress call from Dr. Chioma Okoli, who owned the house that was being burgled by the suspect at Amakama Housing Estate in Umuahia.

I joined armed robbery to save my sick son- Robbery suspect was last modified: March 4th, 2017 by Reporter