“I Joined PSG For The Project” – Kylian Mbappe 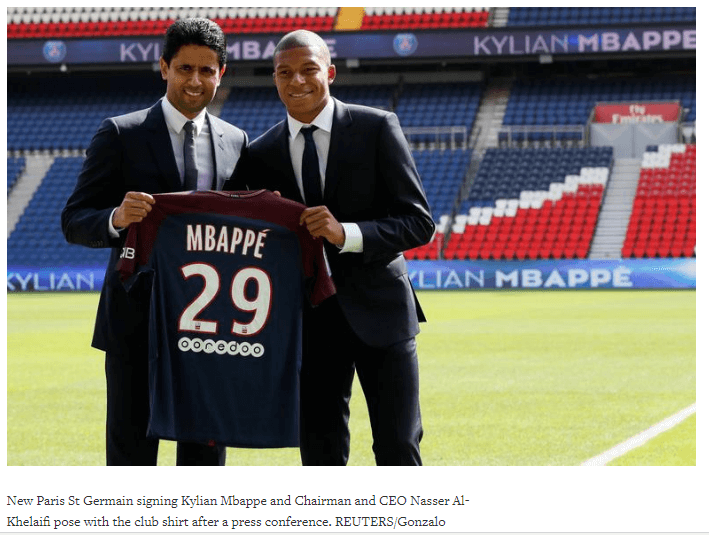 Paris St Germain’s new striker Kylian Mbappe said he joined “for the project” and not just to play alongside Brazil’s talisman Neymar, as the French club’s president added that his record summer transfers had been carried out in complete transparency.
Mbappe joined PSG on an initial season-long loan from Monaco weeks after the Ligue 1 club signed Neymar for a world record 222 million euros ($264.80 million).
PSG will complete a permanent deal for Mbappe in 12 month’s time in a deal worth about 180 million euros ($215 million), which would make him the world’s second most expensive player.
“For me it was the project that was going to allow me to develop, to learn while winning. And win right away. We only have one career and it goes quickly,” the 18-year-old France forward told a news conference on Wednesday.
PSG’s deals for Neymar, who they signed from Barcelona after meeting the price in his buyout clause, and Mbappe has triggered an investigation into a possible breach of Financial Fair Play rules by UEFA, soccer’s European governing body.
But club president Nasser al-Khelaifi, sat beside Mbappe, said PSG had nothing to hide.
“We’re very confident in our position, in our recruitment,” al-Khelaifi said. “We paid everything in a transparent way. We have nothing to hide.”
Mbappe, who grew up in a gritty Parisian suburb, said his price tag will not affect his performances and that he would enter the changing room full of humility.
The teenager had been linked with a host of top European clubs during the close season. Mbappe told Wednesday’s news conference he had wanted to remain in France and PSG offered him the dream opportunity to return to his home city.

“I Joined PSG For The Project” – Kylian Mbappe was last modified: September 6th, 2017 by Damilare Salami