Home News Jonathan Paid N34bn for River Niger Dredging, Buhari will Use Far less To Get It Done – Amaechi
News 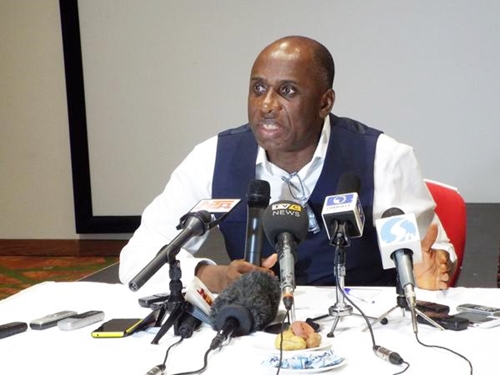 Rotimi Amaechi, the minister for transportation, says the administration of Goodluck Jonathan paid a contractor billions for the dredging of River Niger but what President will use to execute it, will shock Nigerians.

While speaking at the opening of a conference on Fast-tracking Port Reforms in Lagos on Thursday, the Minister of Transportation, Rotimi Amaechi, revealed that former President Goodluck Jonathan after paying a contractor N34 billion for the dredging of the River Niger, failed to get the job done.

The outspoken minister who spoke at the event hosted by The Nation in conjunction with the Federal Ministry of Transportation and Epsilon Limited, disclosed that the President Muhammadu Buhari administration is spending N100 million to get the job done.

”When the River Niger was first approved for dredging by the previous administration, it was approved for N47billion and N34billion was paid to the contractor. Dancers were called in and there was a party.

“The governor said he will accompany me, and I said ‘ok’. So, I asked the governor to flag it off since it’s located in his state,” the minister said.

“NIWA has dredgers, but the previous government preferred to give contractors money to dredge the river with private dredgers while NIWA’s dredgers were lying idle somewhere in Port Harcourt.

“I told the NIWA MD that I will look for money to fuel their dredgers, and work has started. That is why we are dredging the River Niger with just N100m,” Amaechi said.

Jonathan Paid N34bn for River Niger Dredging, Buhari will Use Far less To Get It Done – Amaechi was last modified: May 5th, 2017 by Arinze Ago

18 Rhymes From Your Childhood You Were Too Young to Understand