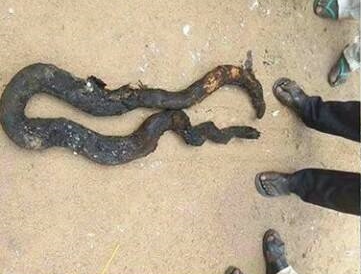 A massive python which was living in the ceiling of the Exams and Record office of the FCT College of Education, Zuba, Abuja, roasted as fire razed the building.

A fire outbreak which razed the building of the Exams and Record office of the FCT College of Education located in the Zuba area of Abuja, has roasted a huge python inhabiting the ceiling of the building.

Though a lot was lost in the fire outbreak, but this has left everyone in ‘thankful mood’, as some alleged that being bitten by the python would have led to a greater loss. Huge Python Inside the Ceiling of An Office in Abuja School Burnt As Fire Razed the Building [Photos] was last modified: May 5th, 2017 by Arinze Ago