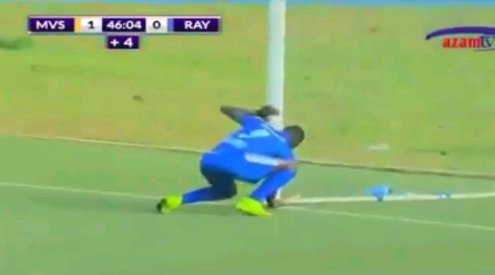 You know the lies we were all told as kids about the match between Nigeria and India, ‘Juju’ was said to make the ball appear as a Lion with three heads whenever the Indian players took a shot at the Nigerian goalkeeper.

Well, we were surfing the web and saw a story that perhaps makes us rethink if the Nigerian Vs Indian match was really a lie after all. The only difference is this one doesn’t play out like that and it happened here in Africa, yes, in Rwanda.

You don’t have to worry yourself about this being true or lie because there’s a youtube video for your perusal.

Rwanda Football officials were forced to take action after black magic was allegedly used during a Rwandan Premier League between Mukura Victory and Rayon Sports.

In the game, Mukura’s striker Moussa Camara whose team was down 1-0 was seen plucking something out from the opponent’s goalpost.

The goalkeeper was then seen chasing after him but he successfully handed over the charm to an umpire and scored a goal a few minutes later.

Watch the video below…

Juju At Work: Player Removes A Perceived Charm From Opponent’s Goalpost And Scores Goal was last modified: December 30th, 2016 by Arinze Ago