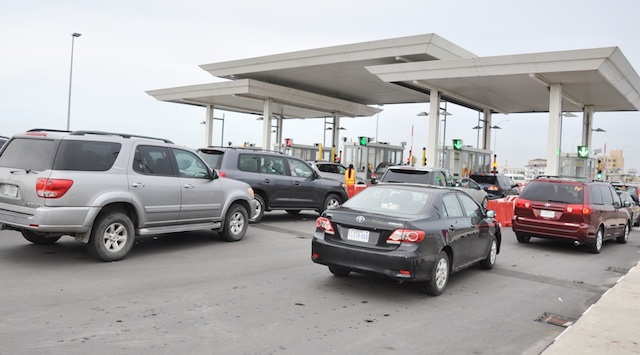 Starting from 1 February, cars plying the Lekki-Ikoyi Link Bridge will have to pay toll of N300, which represents an increase of N50 from the old toll.

The Lekki Concession Company, LCC, had announced a new toll regime last Friday and released the new tolls to be paid by motorists.

A statement issued by LCC on Sunday said drivers/owners of cars and tricycles driving on the Lekki-Epe Expressway would pay N200 toll as against the old rate of N120.

SUV will now attract N250 at the Admiralty Toll Plaza of the Lekki-Epe Expressway, instead of the former N150.

Also, heavy duty trucks/buses with two or more heavy axles will attract N1,000 at the Admiralty Circle Plaza on the Lekki-Epe Expressway, according to the latest statement from the LCC.

The LCC also imposed a 25 percent increase on operators of commuter mini buses intending to use the Admiralty Circle Plaza of the Lekki-Epe Expressway.

LCC has managed operations of the roads for the past ten years despite the yearly increase of the cost of operations and other relevant expenses
LCC provides various other services to road users, especially as it relate to their convenience such as the 24/7 free vehicle breakdown and recovery services by the Company’s Route and Incident Management team
Several thousand road users have benefited from the free service of the Route and Incident Management team since inception
LCC has dedicated Police team
LCC dedicated police team has ensured improved security along the expressway.
LCC has Toll free Customer Service helpline and other services