Home Interviews How Kenny Jones Became a Designer for Obey, Osinbajo and many more
Interviews 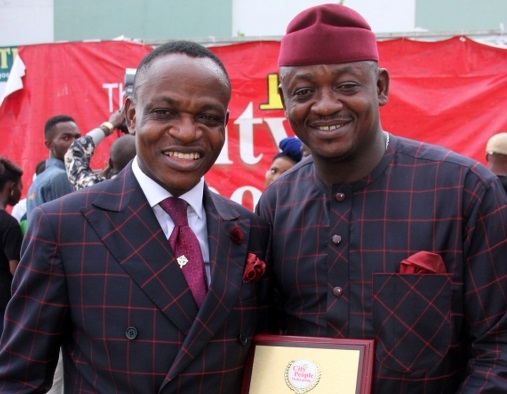 Kenny Jones is a popular Lagos fashion designer, who designs for very many great men of God like Evangelist Ebenezer Obey, Bishop David Oyedepo, KICC Pastor Ashimolowo, Pastor  Kalejaiye of Redeemed Church, Pastor Wale Adefarasin and many more. He is the one behind the lovely outfits they wear. He also designs for Vice President Osinbajo. But he usually does not make noise about it. He is quiet. He is cool and calm. He also sings with his twin brother who is into furniture. At the last City People Awards he was honoured as the City People Fashion Designer of The Year. At the event, Kenny Jones  and his twin brother spoke to FEMI FABUNMI about how his relationship with Obey started.

You just won an award as the Fashion Designer of the Year, how does that make you feel sir?

Kenny Jones: I feel great, happy and exhilarated , I really wish to appreciate my name-sake, Seye Kehinde, the Publisher of City People for bestowing this award on me.

Some talented persons have travelled abroad to exhibit their talents, but for some of us who have remained here, somebody such as Seye Keyinde has decided to recognise us and I give God the Glory.

This type of recognition would definitely spur other talented individuals to strive more.

This should serve as a wake-up for me to improve on my work; I shouldn’t rest on my oars. Already, myself and my twin brother recently waxed an album, entitled God Bless Nigeria.

I really want to advice everyone to do something meaningful with their lives. We should strive to put all hands on deck to ensure this country is great again.

Taiwo, you are into furniture, what should Nigerians expect from you?

Taiwo Jones: Well, I have already done some great works, I will still do more  by the special grace of God.

Both of you are also into music, are you taking music seriously too?

Taiwo and Kehinde in union: Yes, we are.

Kehinde:  Seriously, we are taking music very passionately; we are doing music for the passion and not necessarily for money. Yes, if money comes along the way, we will embrace it, but primarily it is for passion. Basically we sing evergreen songs, we strive to produce songs that would be on the lips of people for a long period of time.

Let me use this opportunity to encourage gospel and secular artistes to sing songs that will give people hope.

How do you both combine your businesses with music?

Taiwo: Music was inherited from our parents. I can say music is in-built; it is something that has become part of us. That is why we do it so passionately.

You both exhibit great level of synergy. Have you ever quarreled?

Kehinde: Seriously, I can’t remember the last time we quarreled. We are best of friends. You can reach me through my twin brother. Let me say that after God, the next man is my twin brother.

You have been very close to Evangelist (Prof) Ebenezer Obey Fabiyi. What are your thoughts on his 75th birthday?

I wish him long life and prosperity. Baba Obey is a father to me. You know how it is. We all have very many fathers. I met him in 1995 through one respected woman, Evangelist Funmi Aragbaiye. I made a white shirt for her, When Baba Obey saw the shirt on HER, he said this shirt looks like one of the shirts I used to sew in Korea in the olden days. She said it is one guy who sews it. Even the guy is in your church. He said: You don’t mean that the person who made this shirt for you is in my church? She said Yes. His name is Kenny Jones. He said Kenny what? I like it. It is pure cotton. I like the cuts. And he put your name on the shirt. I did that shirt in 1993 for her.

It was   the woman who told him about me. So he told her to tell me to see him. She now booked an appointment for me when I went to him on that day. He now asked me. Are you the Kenny Jones? I said yes. He said even the way you dress really shows that you are a good designer. I wore red pan trouser, with white cutted shirt and black waist coat. On that black waist coat I drew a saxophone and I wrote Kenny. I now put on red tie. When Baba saw me he said wow. Are you Kenny Jones? I said yes. He said you need to follow me to my house.

After he closed in church, I then followed him to his house in Ikeja. He asked me to sit down. He told his P.A to climb upstairs to go and bring some of his suits that they made for him in Korea. He showed them to me and said, now, Kenny can we start from this? He said he does not want me to spoil his fabric. So he said I should use small fabric as an experiment for him to see what I am capable of doing. He said before he met me he has never sewn a suit in Nigeria before. He said he had not even tried anybody before. But he said merely looking at me; he is convinced I can do it.

I then sketched the suit for him and I left. When I  returned with the suit I made, the man said  wow. Did you make this in this country? After that I began to make suits for all these big pastors like Pastor Kalejaiye, Oyedepo, KICC’s Pastor, Mathew and a few others. But Baba Obey just developed a special interest in me. Sometimes, he will just pick his phone and call me to say Kenny, I just say I should greet you,  How is your wife and kids? I love you

One day he told me that the way I am doing my own thing is different from the way others  are packaging their own things. He said as from today I will be calling you Kenny Jones of Africa. He has been nurturing me for years, encouraging me to get better. Wherever he travels abroad he will come back with magazines and show me designs. Today, he does not buy suits abroad anymore. I do everything for him and he likes it. I have been designing for him now for years. One day after he came back from abroad he said he wants to change my name to Kenny Jones of the Universe.

He has kept on encouraging me. He keeps saying the way I see you,    you are going to go global that is why he calls me Kenny Jones of The Universe. He prophesied into my life. Before I met him, I didn’t use to travel abroad. But since he began to pray for me, I have been going places. He contributed to the success I have recorded in my life. He doesn’t give me money, but he gives me advice all the time. I tap from his wealth of experience and wisdom. He led me to my success.

What sort of a person is Baba Obey?

Many people don’t know him. They only think he is just a musician. No, he is not,  he is deeper than that. Many people have not discovered him. All that they want from the man is Money, Money, Money. I have learnt a lesson from him. That a man that is loaded will be needed. Baba Obey is loaded.

A man that is not loaded cannot compose glorious and deep songs like Baba Obey does. He sang a song for Wedding. He sang a song for Birthday. He sang a song for Burial, songs that have deeper meanings. He sang  songs for naming ceremony. He is a good composer, who composes melodious songs. The man has  wisdom. He has an eye for details. The man is loaded with wisdom. He carries wisdom in him. I serve him because we all look up to him. The Bible says anybody who cannot serve cannot be a leader. I always consult him if I need to take decisions. It is a great privilege for me to be his designer.

The first cassette of his I bought in my life was Eto Igbe Iyawo Laye… in 1993. I bought it from one woman at Iyana Ipaja, called Blessing. That was the frits tape I ever bought in my life with my money. You won’t believe it that some years, after when they wanted to shoot the video of Eto Igbeyawo record they came to call me. I was inside that video. I was the base man. My advice to all the young people is to get  close to all these old men of wisdom and tap from them. All what we youth want these days from people is money, money, money. That is not good.

How Kenny Jones Became a Designer for Obey, Osinbajo and many more was last modified: April 17th, 2017 by Femi Fabunmi

Royal Swag: Oluwo of Iwo drives himself in a Lamborghini

Nigerians Can’t Run Away From Restructuring –...