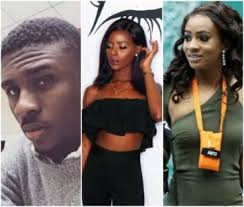 The three housemates received the least percent of votes compared to fellow nominated housemates Miracle (44.33 per cent ) and Cee C (27.88 percent). Anto faced her second eviction from the show after she was brought back into the Big Brother house through a “Bring Back” twist deployed by Big Brother earlier in the show. Upon leaving the Big Brother house initially, she found out her love interest Lolu had a relationship outside the house.

However since returning to the house they both seemed to have worked out the situation. Anto who expressed her disappointment at leaving the reality TV show so close to the end revealed her willingness to pursue a relationship outside the house with Lolu during the live eviction. Lolu received the highest percent of votes (22.23) compared to his fellow evicted housemates.

He attempted to clear the situation surrounding the love triangle drawn up between Dodo, his love interest outside the house and Anto whom he found comfort in during his stay in the house. He said ” I don’t know what will happen with Dodo, I am out here with Anto and that’s all I know”. Khole faced her first eviction after she was initially disqualified alongside her partner K-Brule. She received the highest percent of votes to be brought back into the house promising to dominate the show and fellow housemate Cee c. Khloe who received the least percent of votes (1.89%) this time, surprisingly reserved praise for Cee c during the live eviction show. She told the host of the eviction show Ebuka Uchendu that Cee c had a soft heart despite popular misconceptions about her attitude. Miracle, Tobi, Cee c Nina and Alex are the remaining housemates left to contest for the grand prize of N45 million which will be announced during the grand finale next week.