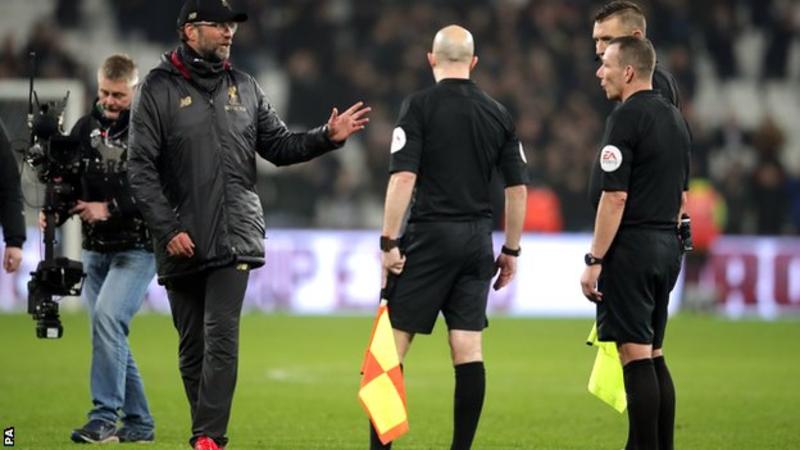 Mane’s opener stood despite James Milner being offside in the build-up.

Michail Antonio equalised for West Ham before the break but Klopp says referee Kevin Friend “did not want to open the gap any more” in the second period.

“I heard our goal was offside, I’m pretty sure the ref knew that,” Klopp told BBC Sport after the 1-1 draw.

“In 50-50 situations it was always a free-kick for the other team, which was hard and did not make life easy.”

Speaking to Sky Sports, the German added: “As a human being, if I know I have made a big mistake in the first half, I don’t want to open the gap any more.

“Referees are obviously human beings, and I understand that, but I didn’t during the game because I had no clue that our goal was offside.”

Liverpool could have snatched a winner through Divock Origi with the last kick of the game, although the Belgium striker appeared to be offside as he struck his effort straight at Lukasz Fabianski.

West Ham manager Manuel Pellegrini also found fault with the referee’s performance, saying it was “difficult to understand” some of his decisions.

“The goal and last chance from Origi was a big mistake from the linesman,” said the Chilean.

“We draw because they scored a goal that was a metre and a half offside. We didn’t lose the game with the last play of the game because Origi missed a shot, but again was offside.”

Liverpool moved three points clear of second-placed Manchester City, although the defending champions could leapfrog them with victory at Everton on Wednesday.

“It’s not about pressure, it’s about enjoying the situation you are in.

“We have 62 points, have lost one game in the whole season so far, which is very positive.”