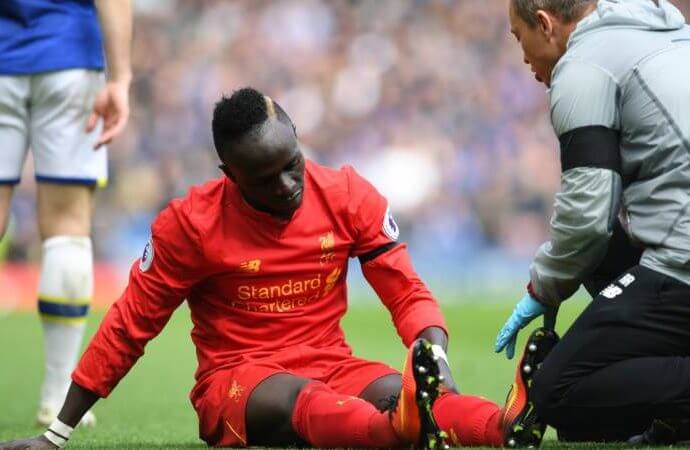 Sadio Mane could miss the rest of the season, Liverpool manager Jurgen Klopp has confirmed.

The Senegal forward sustained a knee injury in Saturday’s 3-1 Merseyside derby defeat of Everton and had to limp off after 57 minutes.

Klopp stopped short of saying Mane definitely will not play again this term, but admitted it was a possibility.

Speaking ahead of Wednesday’s game with Bournemouth at Anfield, he said: “Unfortunately that’s possible. When a knee is swollen, it’s not often I hear afterwards that it’s nothing.

“We wait for final assessment. It’s possible [his season could be over] but why should I say that now?

“It’s not very positive. But we cannot say what it is exactly. It’s not 100 per cent clear. We have to wait a little bit. I can say for sure he won’t be available for tomorrow.”

Liverpool struggled when Mane was away at the Africa Cup of Nations in January, but Klopp was trying to remain upbeat at the prospect of losing his summer signing from Southampton for another sustained period.

“But we still have wonderful players to choose [from]. [We need to] make the best season we can.

“But losing Sadio on Saturday was like ‘oh my God’. Can’t we have one day where everything is perfect.”

The good news for Klopp is the impact Divock Origi had from the bench at the weekend – netting Liverpool’s third goal three minutes after replacing Mane – while England striker Daniel Sturridge is also set to return to the squad following illness and a hip problem.

On Sturridge, Klopp said: “We won’t make any decisions now. Probably he can be in the squad.

“Daniel is in team training and it’s good to have him back.

“It’s actually a perfect moment, a lot of good news, we have to use these boys. They have all the support from my side they can get.”

Origi has spoken of his desire to nail down a first-team place at Anfield and Klopp is delighted to have the Belgium striker at his disposal.

“Sometimes the players are in a good shape, but cannot be in the line-up,” he said.

“It’s good to have Divock. The season is long. He’s a very important option for us now.”

Klopp confirms Mane could miss the rest of the season for Liverpool was last modified: April 4th, 2017 by Arinze Ago