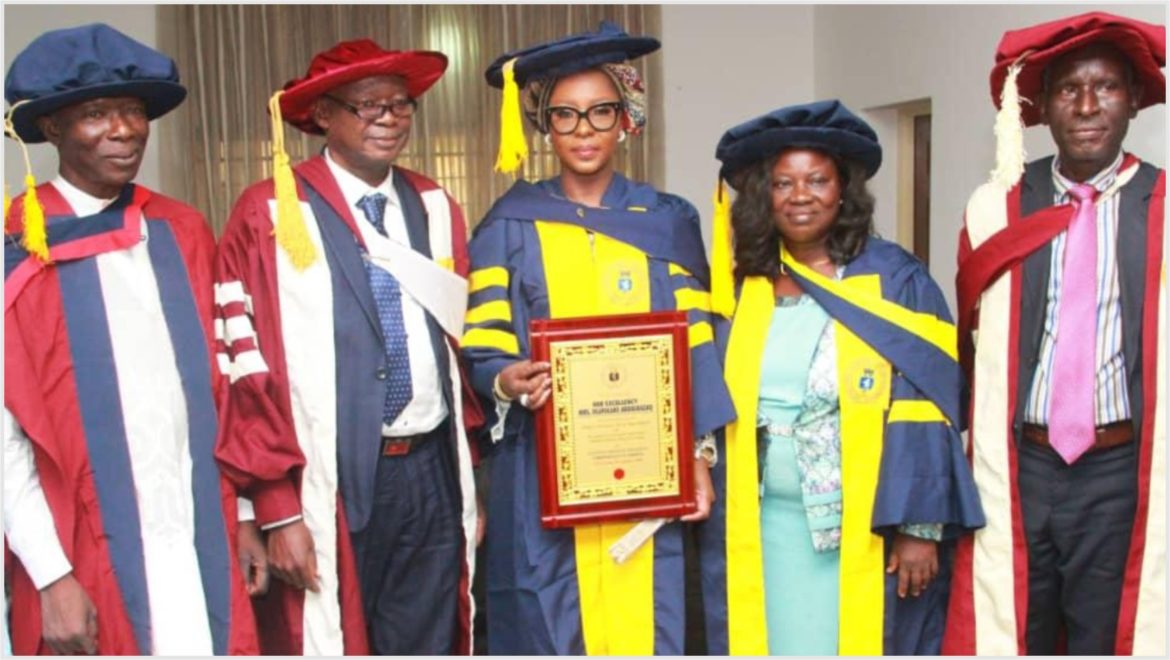 The first lady of Kwara State, Mrs Olufolake Abdulrazaq, has been decorated as a Doctor of Science Honoris Causa by the European American University on the 9th of January, 2020, in Abuja. The honorary degree award is in recognition of Mrs Abdulrazaq’s contributions to Good Governance and social empowerment.

The degree was conferred on her by the university at the congregation of award of degrees held on the 5th of October, 2019. The first lady of Kwara State, accepting the honor, pointed out that the award was an individual recognition, saying that it was a formal acknowledgment and endorsement of her contributions to excellent governance and commitment to social empowerment. She said the platform that the avenue presented to be used to impact on the education and empowerment sectors in Kwara State.

Mrs Abdulrazaq also expressed hope that that the development would enhance partnership and collaboration between educational institutions in Kwara State and their contemporaries in other parts of the world to ensure better standards of learning. The first lady who was conferred with Doctor of Science Honoris causa in excellent governance and social empowerment said she would not relent in fostering her empowerment initiatives through ensuring that vocational skills acquisition is encouraged in empowerment programmes of her office and the Ajike people’s support center.

She reiterated her office and Ajike People’s Support Center’s commitment to continue advocacies on social vices such as drug abuse, gender-based violence, child abuse and sensitization on maternal newborn care and child health concerns. Earlier, the Vice-Chancellor of the university and the all African coordinator of the European American University, Dr. Mrs J C Egbuta, said the contributions of Mrs Abdulrazaq to the society informed the university’s resolve to award her the Honorary doctorate degree. She proceeded to announce the conferment of the doctorate award on behalf of the president professor John Kersey. While performing the conferment rites, professor Sunday Ichado commend the impressive citation of Mrs Olufolake Abdulrazaq saying that she has greatly impacted lives and has contributed immensely to national growth.

In his remarks, the Secretary to Kwara State Government professor Mamman Jubril congratulated Her Excellency Mrs Olufolake Abdulrazaq and enjoined her to continue with the good works that earned her this commendation. Owing to her experience in international trade and investment and her enviable diplomatic career coupled with the honorary doctorate degree, professor Mamman Jubril remarked that Dr. Mrs Abdulrazaq had got a lecturing beat in one of the tertiary institutions in Kwara State on diplomacy and enterprise.

He affirmed that he was doing the same at the Kwara State College of Education, where he teaches Geography and Information Science. On his part, the honourable member representing Share Oke Ode constituency in the Kwara State House of Assembly Hon. Razaq Owolabi commended the first lady’s impactful projects especially in the health sector and the task force, in which they are both members and assured her of his unalloyed support.

Similarly, the Commissioner of Tertiary Education, Hajia Saadat Modibo Kawu congratulated Mrs Abdulrazaq, Mrs Kawu said she was in, no doubt, of the capacity of the First Lady as she had accompanied her on very hectic schedules in the run-up to the election, which brought the governor to power and was happy to be a part of the event. She further stated that her Ministry was open to partnerships with other tertiary institutions around the world.

In his remarks Mr. Farouq Abdulrazaq thanked the university for the award, saying Mrs Abdulrazaq has always been an advocate of a good education and the whole family was proud of her.

READ ALSO: WHAT I DID TO MAKE MY MARRIAGE WORK – ALHAJI RASAK OKOYA’S WIFE, FOLASHADE REVEALS

What I Did To Make My Marriage Work – Alhaji RASAK OKOYA’s Wife, FOLASHADE Reveals