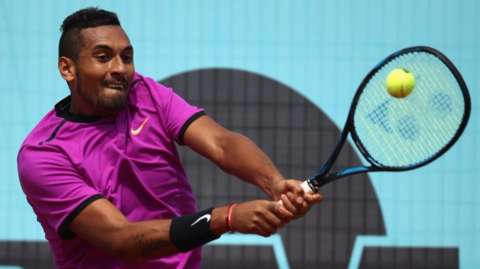 Nick Kyrgios could face Rafael Nadal in the third round of the Madrid Masters on Thursday after easily seeing off the American Ryan Harrison 6-3 6-3.

Nadal begins his quest for a fifth title in Madrid later today against Italy’s Fabio Fognini.

Kyrgios and Nadal have only met twice with the Australian making his breakthrough with a four-set win over the 14-time Grand Slam champion at Wimbledon in 2014.

Fifth seed Milos Raonic is also into the last 16 as he won 6-4 6-4 against Gilles Muller. Raonic will face Belgium’s David Goffin next.

Kei Nishikori beat Argentine Diego Schwartzman 1-6 6-0 6-4. The world number eight will face David Ferrer, who got a bye after Jo-Wilfried Tsonga withdrew with a shoulder injury.

Kyrgios Set For Nadal Test was last modified: May 10th, 2017 by Damilare Salami

Nigerian Music Stars to Perform at One Africa Music Fest