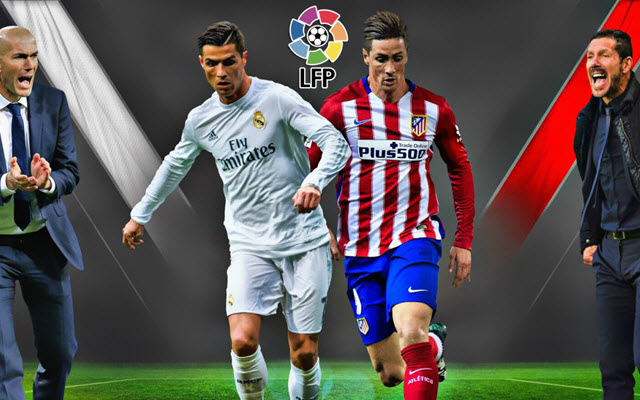 Real Madrid can show how serious their bid to land a first La Liga title in five years really is when they host local rivals Atletico Madrid on Saturday in the midst of the best run of results in the campaign by Diego Simeone’s side.
Real ended a three-season drought against their neighbours earlier on in the campaign with a 3-0 win at the Vicente Calderon in November, thanks to a hat-trick from Cristiano Ronaldo, a display Zinedine Zidane’s side have struggled to top.
The European champions’ destiny is in their own hands as they lead holders Barcelona by two points while also having a game in hand, though doubts linger about their true quality.
Real’s play has been littered with lapses of concentration in defence and they have often had to rely on late escape acts to see them through difficult games.
Atletico have won all three of their previous visits to the Santiago Bernabeu in the league and head there after beating Real Sociedad 1-0 on Tuesday to record five consecutive domestic wins for the first time this season.
Zidane made wholesale changes to his team in Wednesday’s 4-2 win at Leganes in preparation for the derby, resting Ronaldo, Gareth Bale, Karim Benzema and Toni Kroos.
Marco Asensio and Alvaro Morata shone in the absence of the team’s big hitters to help put Real up 3-0 after 25 minutes but familiar frailties were visible at the back as they conceded twice in two minutes before adding a fourth after the break.
Real will find it tougher to compensate for any similar errors against Atletico, who have conceded just one goal in their last six games in all competitions.
Atletico defender Juanfran believes his side are far better prepared to face their neighbours than when they last met.
“It’s clear they were better than us in that game but now it’s another story, a different moment. I hope we can stay on this great run and get something positive, although we know it’ll be difficult because they are top and are having an incredible season,” Juanfran told reporters.
“We had a bad run around November and December and that has made us stronger and we’ve shown once again that Atletico always rises against adversity,” added Juanfran, who missed the crucial penalty in the shoot-out when Atletico lost to Real in the 2016 Champions League final.
Barcelona will be waiting to take advantage of any favours Atletico could do for them when they visit Malaga hours after the derby on the back of a 3-0 win over Sevilla.
Coach Luis Enrique said Barcelona’s first half performance was “the display we had dreamt about”.
The Catalans will be without Ivan Rakitic and Gerard Pique for the visit to Malaga, who picked up only their second win of 2017 by winning 1-0 at Sporting Gijon on Wednesday to move eight points clear of the relegation zone.