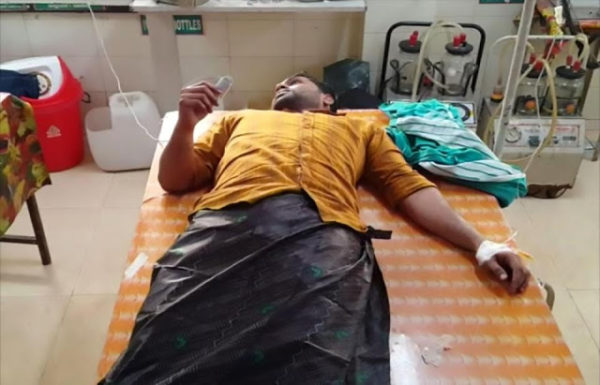 26-year-old Irshad, will be living without his penis as his 30-year-old angry lover who lured him to a guest house in Kattipuram, India, after she found out that he was marrying another man, chopped it off with a knife.

Indian Police told newsmen that the scorned lover arranged the meet up to teach Irshad who was immediately rushed to MIMS Hospital in Kozhikode after the incident, a lesson.

Irshad reportedly got help after locals heard him screaming in agony, before emergency services arrived at the scene, the UK Sun reports.

Irhsad was due to tie the knot with a bride of his parent’s choice. But since the gruesome incident, he was captured lying in a hospital bed giving a thumbs up.

“The man is undergoing treatment at MIMS hospital as of now.

“He was staying in the lodge with a woman.

“We have taken her into custody for questioning.”

Lady chops off lover’s penis to stop him from marrying another woman was last modified: September 23rd, 2017 by Reporter