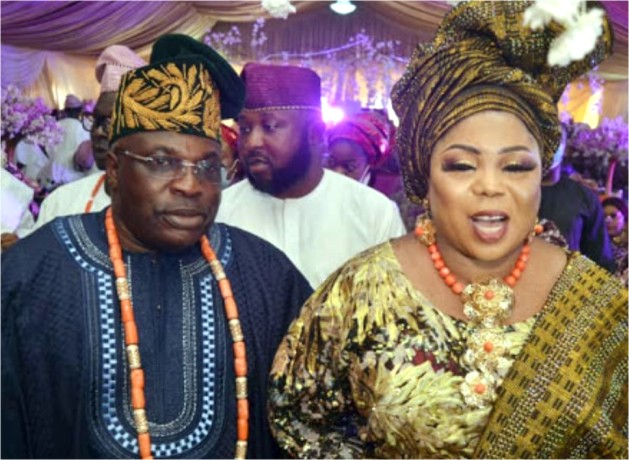 Lagos businessman, Hon. Moses Olaposi Oladugba is 60. But he does not look it. From the way he looks, you can conveniently shave off 10 years from his age and he would still pass for 50. He held a classy birthday to mark 60 a few days back in Lagos.

Although the event took place over a week ago, everyone is still talking about the birthday party like it was held yesterday. Though Hon. Moses Olaposi Oladugba clocked 60 on 26th December 2020, he chose to celebrate it on Sunday 17th January 2020.

His pretty and lovely wife, Barrister Abimbola Oladugba was the perfect Host. She put together a beautiful Birthday party in his honour. It was a well-planned birthday along with their children.

It started with a Birthday Thanksgiving Service was held at Jesus Dominion Assembly at Omole Phase 1 in Ojodu, Lagos. A grand reception followed at The Marquee Event Centre, inside LTV premises at Agidingbi, Lagos. 2 friends of the couple, Prince Rotimi Adesanya and Princess Arinola Badia played key roles in the planning. The Dress Code was White Agbada for men. And for ladies, it was the beautiful Aso-Ebi supplied by Brasas Luxury Fabrics at 60 Marina Road, opposite Leventis bus stop, Lagos island.

It was a classy and beautiful party. Music was by Akin Ajayi, popularly called AA King & The Beats. The event was anchored by ace Broadcaster, Obafemi Craig, who did a brilliant job. He is a pro. The look-alike son of Juju icon, Y.K Ajao also thrilled guests. DJ Rolex did a good job on the turntable.

The organisers obeyed all the Covid-19 Protocols as the celebrant and wife constantly went round to monitor compliance of the rule. Twice, the celebrant shut the gate of the venue to ensure that only the required number were allowed in. Family members and friends of the couple honoured them. Members of Isheri Mainland Club, Lagos attended.

The celebrant is from Owo in Ondo state where he did his primary school. He had his secondary school at A.U.D. Comprehensive High School, Owo. He did his A’Levels at CMS Grammar School. He has a B.Sc in Oil & Gas Management from Plymouth University in England.

This nice man is into Property & Hotel business. His beautiful daughter, Linda flew in from London to join her siblings herein Lagos to celebrate their dad. There was so much to eat and drink. Everything was in surplus. The Queen of Drinks business, Deyola Williams, and her competent team of servers took charge of the serving of drinks and everything flowed as her cute female servers entertained guests with their display of professionalism.

No wonder everyone wants her to handle drinks at their parties. She is the M.D of Richbeth Drinks Company. She has been in business for the past 15 years and her speciality is primarily in the area of drinks logistics.

So exciting was the party that many guests were reluctant to leave as the night wore on. It was all because they had a good time. Of course, City People Events and Parties staff were visibly present from the beginning to the end.

What went through his mind the morning of his 60th birthday, as he woke up, we asked that birthday boy? “My birthday was on the 26th of December 2020 because its a festive period and there will be a lot of activities going on then and people will be so busy, I decided to shift it few weeks after the festive period. Sincerely when I turned 60, I was extremely happy, because I don’t have any health issue. For someone to attain the age of 60 is worth celebrating, for surviving what happened to me in London. One of my friends told me that if what happened to me in London, happened to him, he would have committed suicide. I went through a very rough journey of life. But God has been so kind to me. What makes a man is what God has done for me. Sincerely, I can’t but be grateful to him.”

READ ALSO: SUNDAY IGBOHO FINALLY SPEAKS ON THOSE BEHIND THE BURNING OF HIS HOUSE