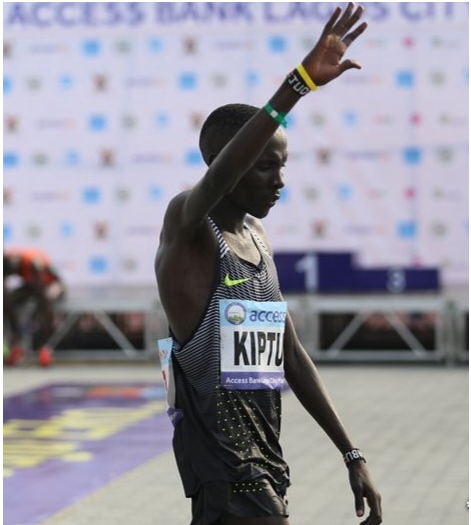 Abraham Kiptom of Kenya has won the international category of the 2nd Access Bank Lagos City Marathon, defending his title.

Sports enthusiasts on Saturday commended the organisers of the 2nd Access Bank Lagos City Marathon for the live telecast of the race on a giant monitor at the Teslim Balogun Stadium.
A lot of spectators who came to watch the marathoners at the starting point trooped into the stadium to watch the event live on a giant viewing screen.

Bola Adewunmi, a student said that it was a good initiative by the organisers. “This is a good thing, the crowd here is huge and I think it has added spice to the Marathon unlike last year.

“I hope they will keep up the good work and continue the competition,’’ he said. A businessman, Fidelis lfeanyi, said that many people who could not return to their home to watch the race because of the road blocks benefited from live telecast on a giant monitor.

“I live in Anthony, but I came to the stadium to watch the participants at the starting point and I cannot go back home now.

Also, Adesuwa Odion, a student, said the number of viewers at the stadium showed that Nigerians were now embracing long distance races.

“I am overwhelmed by the large turnout of people watching this race live inside Teslim Balogu Stadium and this only means Nigerians are having interest in Marathon.

“It is only football that can pull this crowd but all the seats here are occupied and people are standing,’’ he said.

Free face-caps and T-shirts were given to viewers who took parts in the dance, question and answer competitions at the viewing centre.