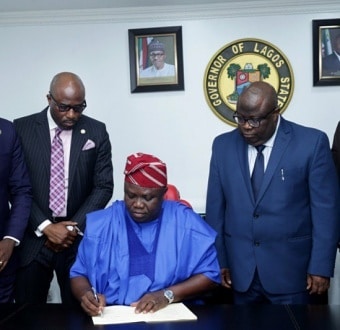 The Lagos state governor, Mr. Akinwunmi Ambode on Friday said he wants the private sector to own the state economy because that is the only way to grow the Gross Domestic Product, GDP of the state.

Ambode stated this in his speech at the first Roundtable on Water transportation organised by the state government under the auspices of the state ministry of transport which took place at Eko Hotels, Ikoyi on Friday.

The Roundtable which was in collaboration with both local and international strategic partners especially from the Maritime industry was organised to discuss the issues facing the state in the water transportation sector and identifying steps for progressively engaging and addressing them.

The governor promised that his government will create the enabling environment and a sense of transparency for the private sector to invest in the state and grow the GDP of the state.

Among such conducive environment, he said is to give relief that will make the investors more comfortable, saying “Lagos is open to business, you can walk into Lagos and do your business.

According to him, the whole objective is not more about profit but to “create a platform for our people to live a more comfortable ife”.

“There are so many cars plying Lagos roads on a daily basis with about 6million entering the business districts, we need to focus specifically on water transportation, the canoes doing that now are not good enough, there is also insecurity.” Adding that parners are needed to make water transportation more attractive and safer for Lagosians.

“So how do we convince car owners to come and use the waterways.” Adding that the whole essence is geared towards creating a better platform for Lagosians to have a better life”.