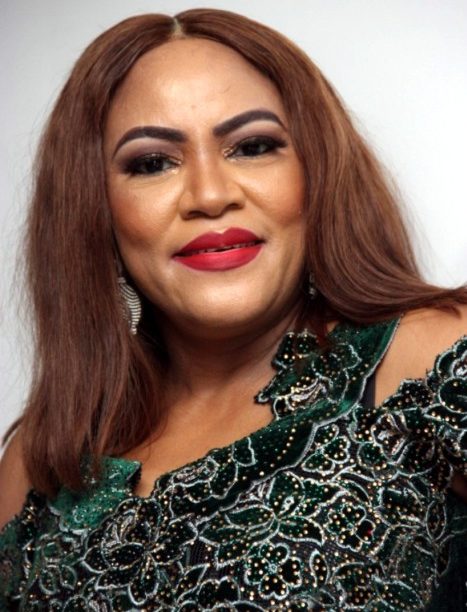 Every 28th of April is always a time to celebrate for Lagos big babe, Dr Prisca Ndu, a woman of many phases and one who has had a stellar career in both the public and private sectors before setting up her own outfit. But Wednesday, April 28, 2021, was more special for her as she marked her 47th birthday and also celebrated a double doctorate degree. Men and women of timber and caliber from different walks of life came to honour this delectable woman on her big day and it was fun all through.

The classy event held at the poolside inside her Lekki Phase 1 house for some of her few friends due to the presence of the ever-dreaded COVID-19 pandemic. Although the gathering was small, it didn’t lack anything whatsoever. From the meal down to the venue, music and paparazzi, it was indeed a party for a woman of her class and style.

City People’s DAMILARE SALAMI 08155134152 and Photojournalist, Abdulrasheed Sanni covered the event and in this report, they bring exclusive gists and photographs for your eyes only, enjoy.

DJ LAST DON ON THE WHEELS OF STEEL

Classy R&B songs of the 1970s and 80s from the turntable of DJ Last Don filled the air as guests began to make their way into the house of Dr Prisca Ndu on her birthday. The brand of music selected by the DJ didn’t only match the day, it also spelt out in clear terms the caliber of friends Dr Prisca has. Every guest at the event had a moment or two to dance to the cool R&B tunes and they undoubtedly enjoyed themselves because their reactions said it all.

B EVENTS MANAGED THE DAY SO WELL

Dr Ndu’s house was suddenly turned into a pool and garden event center all thanks to the expertise and experience of the event manager, Biola Awosika and her team members. The decoration was topnotch, classy and well befitting of the status and class of the celebrant.

IT WAS A POOLSIDE GET-TOGETHER

Even though the guests were very minimal, still, the event had all the ingredients of a proper Naija owambe. Good music, serene environment, good food, proper entertainment and professional photography to crown it all. What made it more fun was the fact that the coolness of the pool got all the guests properly relaxed after a hectic day at work.

Dr Ndu’s simple but classy outfit said it all about her personality. Talk about a woman of class, high taste, proudly Nigerian and still God-fearing, you have simply described who Prisca Ndu is. All these put together could be deduced from her first attire of the day. It was a well-crafted and beautifully designed semi-casual gown. It is not a surprise that she was dressed in such a simple but classy manner, the event dress code was ‘casual’.

ONE FRUITIES AND COCKTAILS GOT EVERYONE SERVED

Expectedly, there was plenty to eat and drink. There was more than enough appetizer before the main course meal was duly served. However, the main talking point for most of the guests was the cocktail served by One Fruities& Cocktails, a brand that is known in many high-class parties in Lagos and beyond.

Call it a bridal gown and you may not be too wrong. The definition of the celebrant’s second outfit can only be gorgeous and fabulous. It was a green colour shiny gown with an extra overflowing design attached from the waist downward. The second outfit expressed one thing, class. This was not the kind of outfit that is seen all over the place, it was specially made for the celebrant on her big day and it couldn’t have been better.

They are called the glam ladies simply because they are gorgeous and glamorous. They are the very close friends of the celebrant, Dr Ndu. These ladies are classy, fashionable and at the very top of their chosen carrier. They were present to mark the 47th birthday of one of their own and they surely made their presence felt with a chant of their group name on the red carpet.

TOAST TO AN ACHIEVER AS SHE COUNTS DOWN TO 50

Yes, Prisca is counting down to 50 and she’s doing so in style. That was the hallmark of the toast that was anchored by two of her very close associates who described her in the Yoruba and Igbo languages respectively.

…AND THE CAKES WERE SO GIGANTIC

This story will be so incomplete if a mention is not made of the two gigantic cakes the celebrant cut on the night. They will obviously cost a fortune but that is not going to be a problem for the self-sufficient and independent lady. More so, her circle of friends is more than capable to show her love in whatsoever way they choose to. Anyone would like to get those kinds of big cakes on their day too.

Dr Prisca Ndu hails from Arochukwu in Abia State, from a family of seven, five girls and two boys and she is just in the middle of the pack. She is the mother of a 19-year old son and a strong Christian with a catholic background. She worships at the House on The Rock Church where her membership has spanned over 20 years.

She started her stellar career in aviation where she rose to the level of public relations manager at an American company called AEG International Overhaul. She left aviation to join the Liberty Bank in 2003 and from there she joined Zenith Bank where she served till 2006 when she joined UBA. After her time at UBA, she left for Bank PHB now Keystone Bank. After her banking experiences, she ported to the oil and gas sector where she was employed as a director in one of Nigeria’s topmost oil servicing firms for two years before being appointed an Executive Director at Assets Management Corporation of Nigeria, AMCON).

Prisca Ndu is currently the executive chairperson of Strategium Technology Services an education and information technology company under Gidi Mobile.

11 Contestants Battle To Become The Next Nigerian Idol