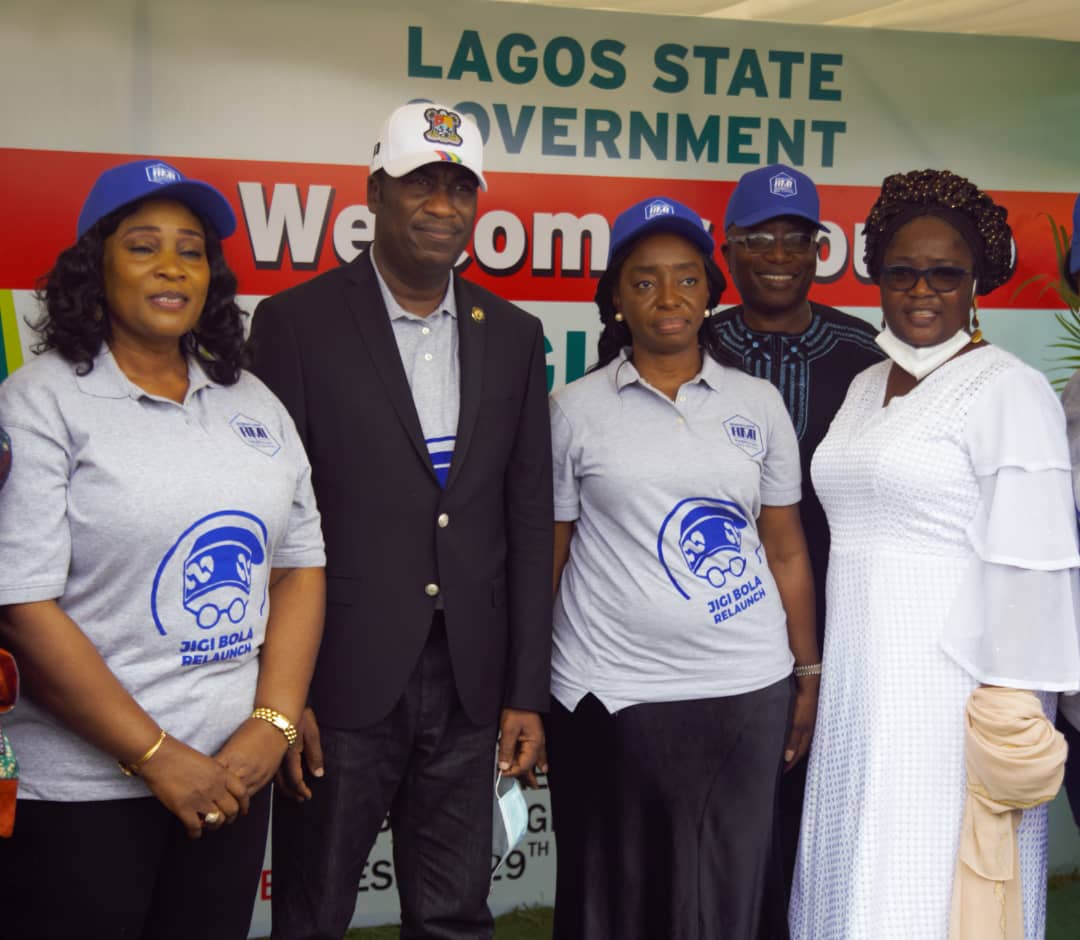 The Lagos State Government on Tuesday re-launched the Jigi-Bola Free Sight and Hearing Aid Programme conceived twenty years ago and implemented during the tenure of former Governor of the State, Asiwaju Bola Ahmed Tinubu.

The Jigi-Bola initiative was conceived as an innovation to improve the vision of Lagosians who were visually impaired, as well as borne out of the concern to reduce the negative effect of preventable visual impairment on residents of the State.

Speaking at the ceremony held at Police College, Ikeja, the State Governor, Mr. Babajide Sanwo-Olu, said the re-launch of the Jigi-Bola initiative signals the commitment of the present administration towards improving the wellbeing and welfare of Lagosians.

The Governor, who was represented by the Deputy Governor, Dr. Kadri Hamzat, said: “Twenty years ago, our visionary, insightful and inspiring leader, Senator Bola Ahmed Tinubu, out of genuine concern for the wellbeing of Lagosians, conceived an initiative to address the issue of growing preventable visual impairment among Lagosians.

“This initiative which was named Jigi-Bola under the Blindness Prevention Programme offered free eye screening, free eyeglasses and free surgical operations. Thousands of Lagosians who would have lost their sight as a result of inadequate awareness and lack of financial means benefited from this very laudable programme.”

He added that the re-launch of the initiative was in celebration of one of the many legacy grassroots outreach programmes of Tinubu’s administration, and also a clear testament of the determination of the present administration to prioritize all aspects of healthcare delivery.

“I am pleased to announce that our administration has taken a step further with the Jigi-Bola initiative by broadening its scope to include a hearing aid programme, which will cater to the needs of Lagosians with hearing difficulty through the provision of hearing aids and other medical support,” he said.

According to the Governor, a huge number of residents were already benefiting from the initiative, adding that 250,000 Lagosians have been listed to benefit at the end of the programme across the 57 councils in the state.

“We understand that vision and hearing impairments can make life difficult but could be prevented with early care and intervention. That is why we are re-launching the Jigi-Bola initiative as a free sight and hearing aid programme. The aim of this re-launch is to improve the capacity for efficient eye and ear care delivery and to ensure that Lagosians do not lose their vision and hearing when it could have been prevented.

“This initiative is open to all Lagosians including those in the grassroots across the 20 Local Government Areas and 37 Local Council Development Areas. The services to be offered include early detection of eye conditions that may lead to blindness, eye and ear health education, free eye surgery and treatment, and also the distribution of hearing aids and eyeglasses,” the Governor said.

Earlier, the First Lady, Dr. Ibijoke Sanwo-Olu said as a medical expert herself, she clearly understands that a large number of causes with visual impairment and hearing loss were preventable and can be treated effectively if detected early.

“Thus, the re-launch of the Jigi-Bola initiative is designed to strengthen the State’s capacity for efficient eye care delivery at the grassroots. Hearing impairment is a silent or invisible disability which makes it hard to notice a person with such disability. The use of hearing aids by those with impaired hearing due to sensorineural hearing loss results in a dramatic turn in the quality of life of these individuals. Sadly, only about one in five people who need hearing aid actually use one.

“The aid improves both hearing and speech comprehension; a major reason the State Government is including the distribution of hearing aid in this programme, thereby bringing relief to residents of Lagos State battling with hearing loss and cannot afford a hearing aid,” she said.

She commended the Ministry of Local Government and Community Affairs, Ministry of Health as well as BOSKOH Lagos Healthcare Mission International for the collaboration that gave rise to the re-launch of the initiative, just as she lauded medical professionals who have signed up to ensure the success of the project including Doctors, Nurses, Optometrists, Audiologists, Health Records Officers, among others.
Among the dignitaries are the royal fathers led by Oba of Lagos, Oba Rilwanu Osuolale Akiolu, APC stalwarts in the State, Exco members, Local Government Chairmen, Iyaloja General, Chief Mrs Folashade Tinubu-Ojo, Market Advisory Council members, CDA/CDC executives and other members amongst others

ABUJA Bizwoman, Olori ASHABI Opens Up On The Story Of Her Life & Success In Biz