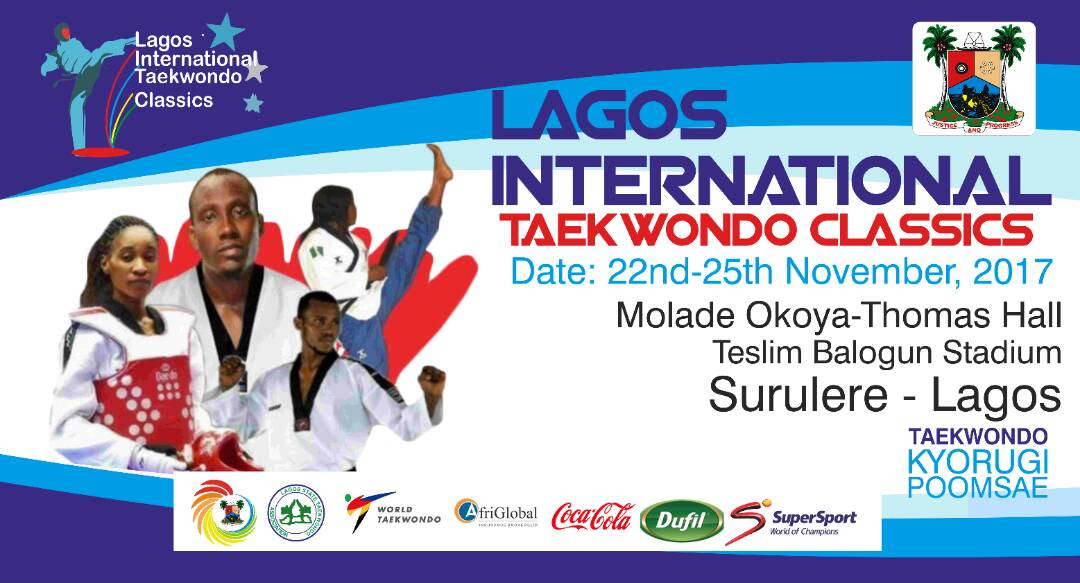 The Lagos State Taekwondo Association in its bid to ensure continuous grassroots development of Taekwondo in Lagos State and Nigeria in general wishes to inform all of the forthcoming LAGOS TAEKWONDO CLASSICS 2017. This year’s competition Sponsored by the Lagos State Government through the Lagos State Sports Commission will be the 4th edition. The program is in line with Lagos state government’s policy on  Sports as entertainment to promote tourism.

We have consistently worked vigorously to enable the Association discover new talents/Athletes that would represented the State and subsequently the country in the next Olympic games.

The preparation towards the event is in top gear. Presently we have positive responses from Ghana, Niger, Mali, Senegal, Togo, Benin Republic and Seychelles. We also have a couple of interested players from France, UK and Indonesia who have sent in their entries. Registration has been opened to Nigerian players. We already have over 250 entries and we might be having close to 300 by the end of registration.

Majority of the necessary state of the art equipment have been ordered and the necessary agencies and bodies for support have been contacted. We have also engaged the embassy of Republic  of South Korea through the Korean Cultural Centre for their usual technical support which has been constant over the years. Before the competition, an officiating seminar will be conducted by our visiting international referee; this will also include all the invited international referees to ensure standardization. The charting, sorting of the entries and fight management is being handled by Events pro (a seasoned Combat sports events management Company).

From inception, the Lagos State Taekwondo Association’s main objective is to encourage the participation in the growing art and sport of Taekwondo as well as to drive improvement in performance and Global standard in the sport. This is primarily achieved via:

*Ensuring personal development of its Athletes.