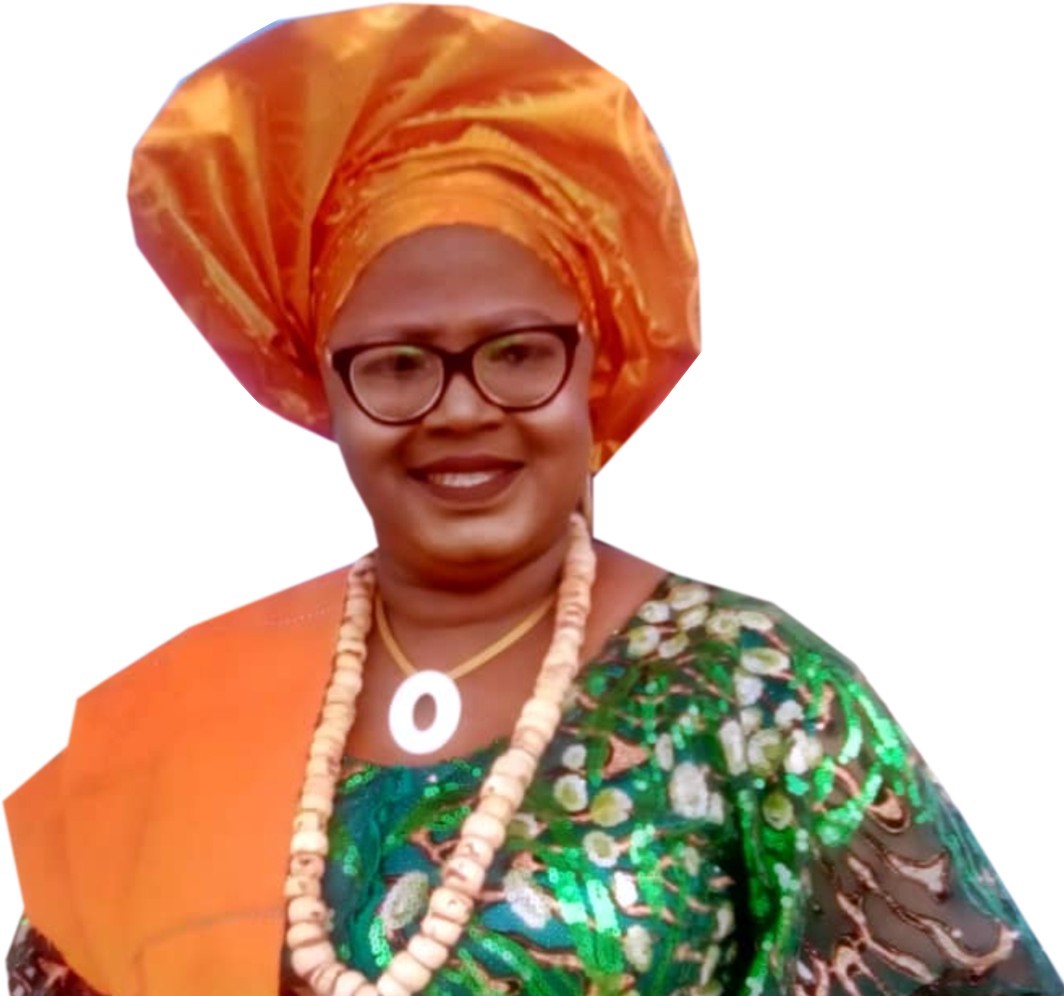 Yeye Aare Oyewunmi Esusu is the Governor of the Lagos Chapter of TAMPAN. She is one of the top actresses who interpret roles perfectly. Her name may not readily ring a bell-like some of her colleagues that have adopted names from the various roles they acted, but Oyewunmi Esusu is surely one of the faces to reckon with in the industry. Her prowess and mode of delivery have made her a sought after actress. She is jet black with a flawless skin beautiful also. She speaks very well, though many don’t know she started as a Teacher in Lagos and rose to become a Director of Education, at the Lagos State Ministry of Education.

Her career into the make-believe world didn’t just start today. It started a long time ago. Just like other veteran actors and actresses who started as ‘Alarinjo’ from different theatre groups, Oyewunmi also started from a dancing troupe. She nursed the passion until she became of age and her path crossed with veteran actor, Alhaji Adebayo Salami popularly known as Oga Bello, who tutored her well enough to also become a face to reckon with in the industry.

Now, the good news is that Yeye Aare Funmilayo Oyewumi Esusu is set to hold a 3-1 celebration: her birthday, launching of her new movie “Sebe” and pulling out of Lagos State Civil service after 35years. It is going to be a great event, as preparation is in top gear, come 29th of Nov, 2019.

In preparation of this great event, City People Publisher, SEYE KEHINDE and Assistant Editor, SUNDAY ADIGUN, met with her and she revealed exclusively what many people don’t know about her life and career. Excerpts.

Let me start by congratulating you on your coming events. We heard it’s 3 in 1 event, can you tell us about it?

Thank you very much. I’m Chief (Mrs.) Oyewunmi Esusu. I thank God for my life, for sparing my life for 35years in service. I retired as a Director of Education after 35 years in service. Then, I  want to glorify God for my life, and that is why I said I should do a  retirement party, with launching, because last year I did a big project called “Sebe” and I’ve not launched it. Another one is my birthday that always comes every November, and that is why I decided to join the 3 events together to form one party.

You are one of the most respected actresses in the industry, but many don’t know how you started. How did acting start for you? Knowing fully that you are also a Civil Servant how do you joggle the two?

Ever since my mother conceived me, she said my pregnancy had been telling her that I would be an actor in the future. When I came to life all the things in me were dramas. The journey started since the day I was a year old because anytime my parents see me doing anything, they see the act of acting in it. When it comes to the time of having my sense of belonging, I went for theatre art. That was in my NCE and University. When I achieved my aim theoretically, I proceeded further to go and learn more practical under my father, my mentor, Otunba Adebayo Salami, popularly known as Oga Bello. I made sure that I ran my entire practical course for 4 years despite the fact I learnt and read Theater Art.

Since then, I’ve never seen any disappointment in my life because I dreamt of my career and I achieved it. In the theatre industry, there are so many aspects of life in it, which is very difficult for people to see, but since I know that acting is in me I find it very easy no I was able to manage my teaching job with acting, as well. Weekends are always free for me, and at times I go to the location after school hours, coupled with our holiday time which at times lasted for weeks or months. So I have time for acting. Because of my determination, I prefer not to sleep to achieve my goal. I also used to beg my directors to fix  Friday, Saturday and Sunday for me. I have never allowed one to hinder the other and I’ve been doing this as far back as 1997. I’ve never experienced any obstacle. God has also been good to me in that regards too. I started appearing on television in 1997, but I started acting since 1980.

How do you find been Governor of TAMPAN Lagos State Chapter over the last one year?

I’ve always been dreaming of what I want to become in life. When I came into the industry, I’ve been going up and down to make it a success. In my local government, I’ve been the secretary for 8years, after that, I contested for the post of deputy governor which I did for 16years. By that time I was already aiming that, towards my retirement, I will contest as a governor. I decided to stay as deputy governor  TAMPAN)  for 16years because I don’t want to mislead them. There is no way I can be in service and still run as Tampan Governor. So when I noticed that it remained some months for my retirement, and God so good it was the time of the election, as well. And I thank God that I won. Now that I’m out of service, I’m fully back in the theatre.

Since you came in, what have you been able to change about the association?

I came in 9months ago, and since then, I’ve been able to marry everybody together, those that have run away, I made sure that I drew them back. Then the women’s wing, I made sure that I standardize them and they are on their feet now. And for our Local Governments that we have under the state, I made sure that all the chairmen are really performing their work diligently.  We went to location together to shoot films, from one location to other.

Let’s talk about your background, and at what age did you actually discover yourself?

I’m an Ijesha woman, but I grew up in Oyo State. I was not exactly born with a silver spoon, but thank God my parents are educationists and I thank God for the way they trained me to this level. I have achieved my goal in education as a Director of Education.   I was in Primary 6 when I discovered myself, even before primary 6. We’ve been going up and down for cultural festivals and all that, which I was the leader by that time. When I was in secondary school, I was looking for ways to start acting because we were doing dramatic society until one day, when  Late Hubert Ogunde came to my school in Ilesa and I decided to go with him. But my father sent me back around in 1980. After that, when I see people on TV acting, I used to feel sad; wondering when am I going to start mine. In fact, I used to curse myself that if I don’t go into acting my enemy would not die peacefully. But the day the Lord showed me the way and the light through Adebayo Salami, was when I acted as an old woman in my first film ‘Akobi Eledumare’, I was extremely happy and I vowed that I will not go back until the nation knows me, and thank God today, I’m one of the people that someone would say, this is an actor. So I’ve started since primary 6. I started with a dancing troupe.

Mere looking at you, watching and listening to the way you interpret your roles, one cannot but say you are very sound and knowledgeable. What is your educational background and what other things do you do aside acting?

After obtaining my primary 6, I went to a modern school for one and a half years before I crossed to Secondary school at Edunabon via Ipetumodu, Ile-Ife. In 1983, I went for my Grade 2, after that, I started my career as a teacher. After my grade 2, I went for my diploma course before I proceeded to obtain what we used to call Asoso by that time. Then I went to NCE at Ikere Ekiti. After that, I went for CCA (Cultural and Creative Art). I then proceeded further to Ado Ekiti University to obtain my degree in Fine and Applied Art and I ended up in LASU to obtain my Masters in Theatre art.

Let’s talk about your marriage, who is the man in your life?

The first man in my life was a Major. He died in a plane crash. I remarried to Commissioner of Police, Aare Kolawole Michael Esusu and God blessed us with lovely children.

You made a statement that you were told your pregnancy was talking to your mum, what was the mystery behind that?

When my mum was pregnant with me, she said I stayed in her womb for 11months, that I refused to come to the world at 9month as usual to every woman. 10month I didn’t come down and I used to kick as if I want to communicate with her., and she would be communicating with me too. The day I eventually came to the world, at exact 11month, my mother refused to go to the hospital, she didn’t want to be embarrassed again as they’ve been doing to her, sending her back home on several occasions. She refused to go to the hospital despite been in labour. She locked the door on herself and when the pain was much she eventually delivered the baby by herself. And what amazed everybody was that I came with 4 different birth signs that Yoruba called “Amutorunwa”; All my body was full of cord which signifies “Aina”, I was born on Sunday. my hair was tread, rasta which signifies “Dada”, and my face was down which signifies “Ajayi”. Since then everything I do always amazes my mother. And she always sees me as a miracle child.

READ ALSO: WHY OTUNBA PASEDA WILL MISS HIS LATE DAD

Why OTUNBA PASEDA Will Miss His Late Dad