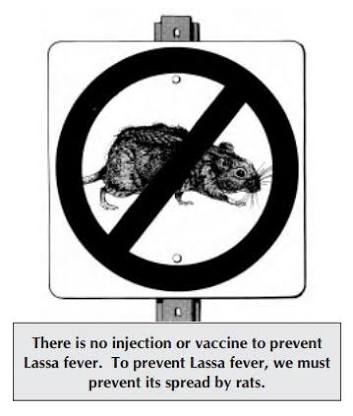 Lassa Fever has hit Lagos State, Western Nigeria and two people who were admitted at the Lagos University Teaching Hospital (LUTH) have been confirmed dead.
The Chief Medical Director of LUTH, Prof. Chris Bode, confirmed at a news briefing in Idi-Araba that the patients came from outside of Lagos.

Though a few cases have been confirmed recently in Plateau, Yobe and Edo states, he mentioned that there is no cause for alarm.

The Association of Resident Doctors (ARD) also confirmed that one of their members had tested positive for Lassa Fever.

No fewer than one hundred different hospital workers are under surveillance after being exposed to this index case and are currently being monitored.

The first was a 32-year old pregnant lady with bleeding disorder who died after a stillbirth; post-mortem examination had been conducted before her Lassa fever status was eventually suspected and confirmed.

Do not spread your food outside in the open; put food items in rat proof containers so that rats will not get access to the food.

How It Is Spread

The `multimammate rat’ called Mastomys natalensis which has many breasts and lives in the bush and around residential areas is the reservoir host of Lassa fever. The virus is shed in the urine and droppings of the rats, hence can be transmitted through direct contact, touching objects or eating food contaminated with these materials or through cuts or sores. The onset of the disease is usually gradual, starting with fever, general weakness, muscle and joint pains, prostration, and malaise. After a few days, headache, sore throat, muscle pain, chest pain, nausea, vomiting, diarrhoea, cough and abdominal pain may follow. “In severe cases facial swelling, fluid in the lung cavity, bleeding from the mouth, nose, vagina or gastrointestinal tract and low blood pressure may develop; shock, seizures, tremor, disorientation and coma, and death may be seen in the later stages.

If You Arrest Me, Biafra Republic will Come Even Quicker – Nnamdi Kanu Declares as He’s Set to Visit Lagos

#Throwbackthursday: How Major Chukwuma Nzeogwu Died in Ambush Near Nsukka Less Than a Year After He Plotted 1966 Coup