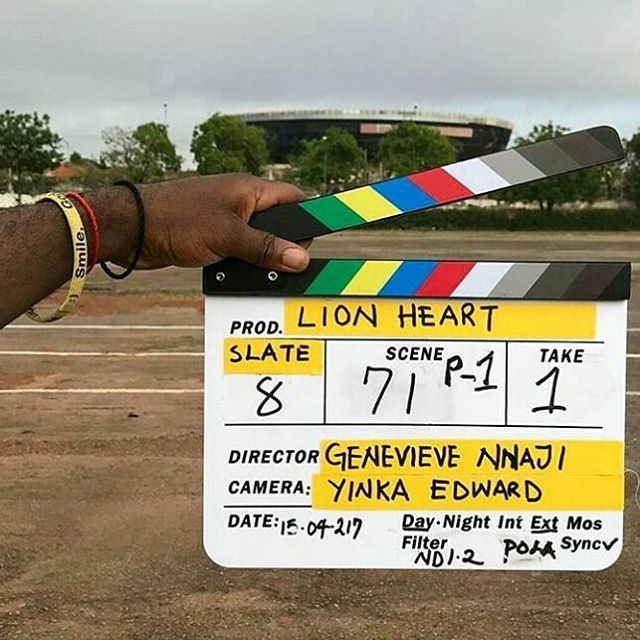 Featuring Patrick Diabuah, Chigul, Saidi Balogun, Tomiwa Edun, Bimbo Manuel, Ali Nuhu and Uche Jombo, new film, Banana Island Ghost tells the story of a ghost who is scared to go to heaven because he doesn’t have a soulmate, so convinces God to give him three days to fall in love.

He is paired with the cantankerous Ijeoma who will do anything to save her father’s house in Banana Island from the bank coming to reclaim it in three days. The two of them must first survive each other, then learn to work together, and eventually fall in love, to see their destinies unfold.

Banana Island Ghost is produced by Biola Alabi Media and it is directed by BB Sasore.
Omorinsojo Spaine is a producer on the project.

Here are a few things we learned from watching the trailer:

This has to be the longest trailer in the history of mankind.

Who cut this trailer? Who sanctioned its release? Who thought it would be a fantastic idea for a trailer to be three and a half minutes long? What was that person’s motive? Is this a case of seeming low self-esteem? The kind where you think you have to do so much so you can impress? Is that what is happening here? The makers of Banana Island Ghost saw emptiness in it and decided to try to convince us – through the trailer – that the film is actually good? What happened to the saying “Less is more”? Why reveal almost everything in this trailer and leave little to our imagination? SMH!

It is confirmed! Sadly, it seems Ali Nuhu isn’t the fantastic actor you wish he was.

I like Ali Nuhu as a person. He has a fantastic personality. No homo, he looks good on the eye also. However, my fear which crept up in Dare Olaitan’s Ojukokoro has been confirmed by his appearances in this trailer. Ali Nuhu isn’t the fantastic actor I wished he would be. He is, you know, just there. There were two cringe-worthy beats from the Kannywood star in this trailer. First, when he was shooting the gun. Obviously, Ali has never seen a gunshot before. Second, when he asked Saidi Balogun and Chigul at the casino table “What do you have?” I’m unlikely to see an acting more forced and looking contrived this year. Or is it that his boundary hasn’t been pushed by a bad-ass director? I wish it was the latter because I really do like Ali.

The fight scene that involved the thugs and the ghost towards the end of the trailer looks very well choreographed and executed by people who actually know what they are doing. Hopefully, this will still be the case when we walk out of the cinemas in August.

This film does not look to be lacking much technically.

Well, the visuals look very good. Sound may be a different kettle of fish (isn’t it the case with many-a-Nollywood film?). Cinematography and lighting look all well and good from the trailer. You can see the kind of attention and money paid by the makers to make Banana Island Ghost look good. Will the story and acting complete the job?

Bimbo Manuel already looks like the winner of the acting challenge.

Considering he is the veteran in this film, it is not surprising to see that he wins the acting challenge from what we can see in this trailer. The only folks to come close to Oga Manuel on the “veteran” front are Uche Jombo who we only see for a couple of seconds and Saidi Balogun who reminds us that those famous facial expressions of his still exist. After seeing the full film, we won’t be surprised if Bimbo Manuel turns out to be its saviour on the acting front.

The accident scene, will we get it right?

Nollywood has struggled to beautifully achieve auto accident scenes. While we have moved away from the driver swerving left and right in slow motion before finally gently coming to a stop in front of what it is supposed to collide with, accident scenes are still bogeys for many directors. It is not entirely their faults though, as the resources needed to nail it is still s big ask for Nigeria. The one in this movie looks cool – burnt car on the edge of the bridge and all. But we would prefer to wait until we see the real thing before we swerve into any conclusions on this one.

Watch the trailer below:

Finally! Twitter Wins As Rihanna & Lupita Nyong’o WILL Star Together In Film

Revealed: This is What Happens to Your Body When You’re Kissing