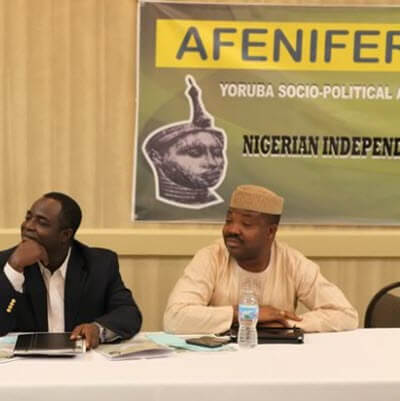 Afenifere, a Yoruba socio-cultural group, has asked herdsmen in the south-west to leave the region or face consequences.

During a press conference in Lagos, leaders of the group asked the national assembly not to amend the land use act to grant powers to the federal government to take over state lands for Ruga.

Ayo Adebanjo, an elder statesman, who read the statement on behalf of other leaders of the group, said the killings in the region would no longer be tolerated.

Adebanjo said the group demands the immediate exit of the “killer herdsmen” from Yoruba land, adding that refusal to leave would lead to a confrontation from the people.

The statement partly read, “We are miffed that those who will not allow our elected governors to have police are now setting up Fulani bandit-vigilantes on our soil in addition to the militias terrorising our land.

We demand their immediate exit from Yoruba land. And if they refuse to leave in a reasonable time, we will not stop our people from confronting them.”

“We cannot continue to live under these conditions. The blood of our people will no longer be used to water the tree of a dysfunctional unitary order. We demand an immediate timeline for a return to a federalist Nigeria so that we can have the autonomy to run our internal affairs. Failure to do so will constrain our capacity to continue to restrain our people from embracing self-determination.

“It is now clear we Yorubas have had enough, as the Ooni of Ife, Alaafin of Oyo and Prof. Wole Soyinka and other Yoruba patriots have warned. We sound it very loud and clearly that corporate Yoruba have never questioned the continued existence of Nigeria and we hope no one pushes us to that.”

Ango Abdullahi, chairman of the Northern Elders Forum, had earlier called on herdsmen in the southern part of the country to return to the north if their safety is no longer guaranteed but President Muhammadu Buhari asked the cattle rearers to ignore the order.