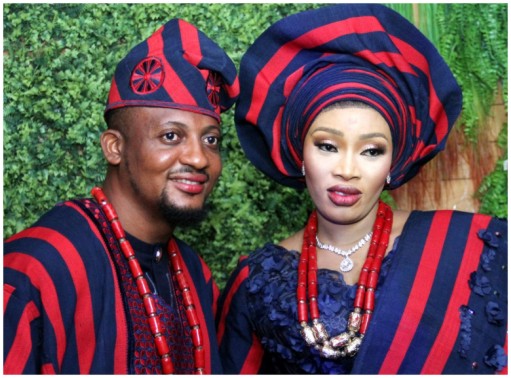 “I love you without knowing how, or when, or from where. I love you simply, without problems or pride: I love you in this way because I do not know any other way of loving but this, in which there is no I or you, so intimate that your hand upon my chest is my hand, so intimate that when I fall asleep your eyes close.”

Those were the words of two love birds Tosin Olugotun and Tobi Salako, as they were joined together on Saturday, April 17, 2021, to become Mr & Mrs Salako. Tagged #T&T21. The event didn’t fall short of its expectation as a Lagos Owambe party. Top Lagos Society men and women, fabric merchants, politicians and members of the public all made the event memorable for the couple.

City People’s DAMILARE SALAMI 08155134152 alongside Photojournalist Abdulrasheed Sanni was there. And in this report below, they bring you details of all that went down, enjoy.

It started as a bright day as all the vendors made it to the Mercy Event Center at Ikosi-Ketu Lagos. It was not difficult to locate. The well decorated and spacious venue also served a dual purpose of hosting the traditional marriage ceremony and the reception which followed almost immediately after the engagement as it is fondly called.

Members of the Salako family from Abeokuta, Ogun State and the Olugotun from Arigidi Akoko in Ondo State both stood firm to show love and support for the lovers as they marked one of their most memorable days on earth.

Beautiful Tosin on the road to becoming Mrs Salako didn’t disappoint with her overall outlook on her big day. Her traditional attire was a navy-blue and wine colour Aso-Oke. She was gorgeously dressed from head to toe. Let’s quickly tell you about her jewelries. They were so classy that you would wish you had it on yourself.

As Tosin made a triumphant entry into the traditional marriage venue, there was something outstanding about her girls and it was the way the rocked the music. As the traditional band reeled out different genres of music, they were there to rock it with different trending dance steps. The bride herself wasn’t a terrible dancer, she complimented her team well and made it a perfect fun-day for everyone.

One of the things that describes how fun filled an event is how enjoyable the music is and this can only be attributed to the performance of the DJ or live band as the case may be. At the #T&T21 wedding, DJ Sky lighted up everywhere with danceable music. From the blast of the whistle till the live band took over, DJ Sky entertained as well as put up a brilliant performance such that many of the guests hailed his performance.

The classy wedding was anchored by a fast-rising compere and comedian, MC Tuba. The young, agile and good looking anchor had fun to the party. He was not just a compere, he brought the funny side of his trade to the fore. MC Tuba no doubt is classy indeed and the way he combines the use of English and Yoruba language placed him at a level that only few fast-rising talents can match.

The Live band made the day funkier than you can ever imagine. Fast-rising multi-talented team, The Eagles band was behind the microphone.  Led by Omoba Orun, the team serenaded the couple, wedding guests and everyone in attendance.

The event could as well pass for a fashion show. Different shades of gold practically took over the day. One of the most prominent of the groups that rocked fashionable Aso-Ebi was the bride’s friends in black and gold. They rocked their attires in such a way that they got a second look whenever they pass anyone by. Let us also quickly tell you that this group of young pretty babes practically took over the red carpet.

Alhaja Fashida Apeke Bangbola is a popular name in the fabric business world. She is the brain behind Roniks Fabrics and also doubles as the wife of the Honorable Commissioner, Lagos State Local Government Commission, Hon Akeem Adisa Bamgbola. She was at the center of the event, being a very good friend of the sister to the groom. She stood by the couple and supported them with all she had. She and her close associates stormed the event in style and added a lot of glamour to the event.

A MINUTE SILENCE IN HONOUR OF GROOMS PARENTS

At both the traditional and reception programmes, a minute silence was held in honour of the parents of the groom, Mr and Mrs Kolawole Salako who had gone to be with their maker. Truth be told, the groom had worthy family members who filled the gap one of them was his older sister filled many vacuums for the handsome Tobi.

Mrs Abiola Famoriyo is the older sister of the groom who played many roles at the event. Apart from standing in as the groom’s mother, she also ensured that all the guests were catered to. She was also spotted appreciating every table from the dignitaries to every other guest. She also took photographs with every table as a way of saying thank you.

Handsome and stylish Lagos politician, Hon Akeem Adisa Bamgbola (HAB) was the Chairman of the day. The easy-going politician while addressing the couple took his time to encourage them to stick with one another no matter the challenge because they can only overcome if they stay together as one. Hon Bamgbola is the current commissioner for Local Government Commission in Lagos.

Have you seen a bridal train that is as long as a train indeed? You needed to be at the #T&T21 event to have a glimpse of how beautiful such a train can be. Starting from the Aso-Ebi crew down to the groom’s men and ladies in wardrobe, the train was numbering about 50 people.

Another talking point at the event was the bride’s mermaid gown. It was an overflowing white gown with shiny stones. The gown stood her out among the crowd. She was full of smiles as she walked down the aisle in the company of her husband and her long bridal train at the reception.