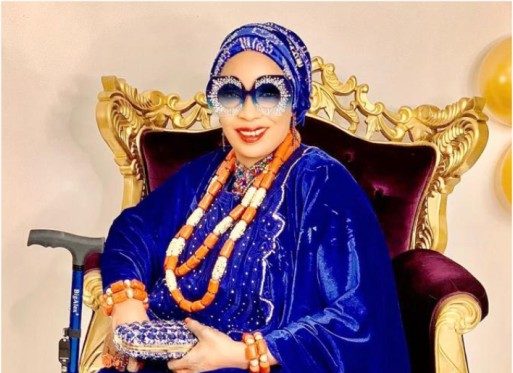 A few days ago, Screen goddess, Aderonke Ajenise-Oduborisa,  popularly known as Ashabi Olorisha was thrilled with  surprises as family, friends, business associates and fans organised a grand party to celebrate her 57 birthday.

The party was held on Saturday, April 10, 2021 at the popular Nigerian Army Reference Hospital Officer’s Mess, in Yaba, Lagos State. Her birthday was actually on 16th February, 2021.

The US-based veteran actress was thrilled with an epic reception on her arrival at the venue of the party as she was not pre-informed of the party.

The atmosphere of the party was lite. Guests all dressed, making different style statements had fun of their lives. popular Juju-gospel music band, Okiki Ade, churned out classics to entertain the celebrator, family members, friends, associates, lovers and fans of the movie icon.

While appreciating the organisers of the secretly planned party, Aderonke said she was overwhelmed by what she met on ground as she never imagined it. She explained how everybody around her hid the plan of the birthday party from her, stating the role each of them played. She said it was the most thrilling moment of her life. She however appreciated them for celebrating her at 57 and prayed God would rain lots of surprises on their lives.

She is a Princess from Lasunwon Royal Family of Ikorodu in Lagos State. She was born into the Ajenise-Oduboria of Adegorushen, a royal family in Ikorodu, Lagos State 57 years ago, The beautiful celebrator began her acting career in  the 1970s through the late Leke Ajao (Kokosari), after a while, she went on break and fully came back bigger and stronger into acting in 1994, through the late Alade Aromire.

She left the shores of Nigeria for greener pastures, despite her great impact in the movie industry. Before leaving Nigeria, she featured in the rested NTA popular soap opera “Village Headmaster, and Tales By Moonlight, and lots of movies such as Why me, Oyin mi, Oke Langbodo, Akeweje, Ebiti, Imported Lomo, America Jollomy, Angelina, Olaniyanu, Alani Cansellor, Malomo and many more.

Her role in the epic movie Ashabi Olorisha shot her to limelight and most people only know her by that name. She has groomed lots of talents in becoming accomplished actors and actress.

READ ALSO: WHY MARRYING 2 TO 4 WIVES IS NOT COMPULSORY IN ISLAM – IBADAN CLERIC, SHEIK TAOFEEK AKEUGBAGOLD