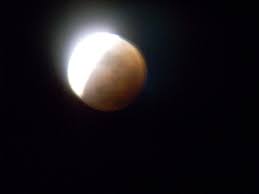 Various astronomical events are occuring throughout the month, including a solar eclipse (pictured right), which will be seen over South America and Africa on February 26. Other events include the Alpha Centaurid meteor shower (stock image top left) on February 8, and a lunar eclipse (pictured bottom left) on February 10. It is time to get your binoculars at the ready, as February looks set to offer some stunning astronomical events to viewers around the world. PHOTO CREDIT: DailyMailUK Online

Nigerian would tomorrow, Friday February 10, join the rest of the world to witness series of spectacular displays including a lunar eclipse and comet 45P, also known as the New Year comet.

This month features meteor showers, eclipses of the sun and moon, and lunar satellite posing with planets.A lunar eclipse occurs when the Moon passes directly behind the Earth into its umbra (shadow). This can occur only when the sun, Earth, and moon are aligned (in “syzygy”) exactly, or very closely so, with the Earth in the middle. Hence, a lunar eclipse can occur only the night of a full moon.45P/Honda–Mrkos–Pajdušáková is a short-period comet discovered by Minoru Honda December 3, 1948. It is named after Minoru Honda, Antonín Mrkos, and Ľudmila Pajdušáková. The object revolves around the Sun on an elliptical orbit with a period of 5.25 years. The nucleus is estimated to be 0.5-1.6 kilometers in diameter. On August 19 and 20, 2011, it became the fifteenth comet detected by ground radar telescope.

Want to see the spectacular displays? Astronomers say it can be difficult to spot with the naked eye, and you may need to use binoculars, as this week looks set to offer some stunning astronomical events to viewers around the world.

On Friday, a lunar eclipse is forecast to appear on a snow moon – a full moon that occurs in February – casting a mysterious shadow across the lunar surface. And just a few hours later, Comet 45P – also known as the New Year comet – will make its closest approach to the Earth.According to a report by DailyMailUK Online, in Europe, Africa and western Asia, the event will be seen as the moon is in the southern sky late at night, while for those in North, Central and South America, the best views will be from the east.

Comet 45P will then be visible in the morning sky in the constellation Hercules, before passing through the constellations Corona Borealis (the Northern Crown), Boötes (the Herdsman), Canes Venatici (Boötes’ hunting dogs) and Ursa Major.

In a blog on its website, the United States National Aeronautic Space Agency (NASA) noted: “Comet 45P, visible after sunset over the last two months – through both binoculars and telescopes – makes its closest approach to Earth on February 11, when it will be 0.08 Astronomical Units (7.4 million miles) from Earth.

“It’ll be visible in the morning sky in the constellation Hercules. The comet then passes through the constellations Corona Borealis (the Northern Crown), Boötes (the Herdsman), Canes Venatici (Boötes’ hunting dogs) and Ursa Major. Then on to Leo; by the end of February. It moves swiftly – 9 degrees each day! It will return again in 2022.”

The comet makes its way back to the inner solar system roughly every five years, and has a bright bluish-green “head.” President of the Royal Astronomical Society, Prof. Martin Barstow, told DailyMailUK: “A good meteor shower is a spectacular sight.

“If you have clear skies, there are few better and easier ways to get an impression of the dynamism of the universe we live in, and how the Earth is directly connected to events in the rest of the Solar System.”

Jupiter’s prominence as the ‘morning star’ will be hard to overlook on February 15. The planet, which will appear as a bright star-like object, will align with the moon, as well as a blue-white star called Spica, which is part of the Virgo constellation.

As well as aligning with Jupiter this month, the moon will also meet with Saturn on February 20 and 21.The cosmic duo will be easy to view in the pre-dawn hours, with Saturn appearing as a golden object next to the moon.

From mid-northern latitudes, Saturn will rise in the east about three hours before the sun, while in southern-latitudes it will rise around four hours before the sun.Through a telescope you may even be able to spot the distinctive rings that circle the planet.With a new moon appearing on February 26, people in South America and Africa will be lucky enough to see the lunar disc pass directly in front of the sun. The moon won’t completely cover the sun, and a small halo of light will remain visible.

The eclipse will begin in Chile, before moving through Argentina, and onto the south Atlantic. It will touch down on the coast of Angola, before ending near the border of Zambia and the Democratic Republic of Congo at sunset.