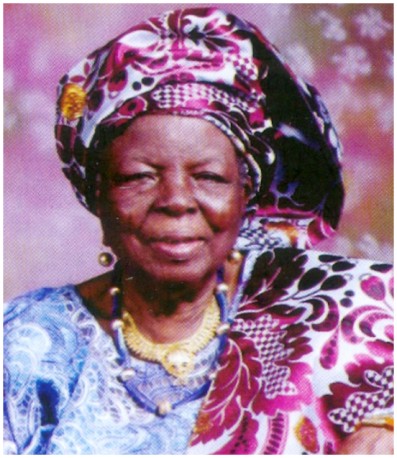 •How She Celebrated A Century Of God’s Grace

What does it take to be 100? Only those who have made it to 100 can tell. That was why on the 21st of April, 2021, family members and guests came together to celebrate Madam Dorcas Ibilola Fadayomi popularly called, Mama Dorcas, who clocked 100. A Thanksgiving Service was held for her at Bola Memorial Anglican Church in Ikeja, Lagos.

The church service began at 11am with family members, friends and well wishers trooping into the church. The service started with the Pianist hitting a melodious chord and everyone rose to sing the hymns. As the service continued, Mama walked in alongside her first son, who ushered her to sit on at the front pew.

After the songs ended and a few prayers said, the priest mounted the podium to give a sermon. In his sermon, he noted how long the celebrator’s life had been as she was born before the advent to the colonial master. He also emphasized on mamas generous spirit as she likes feeding people. Further into his sermon, he admonished all present to ensure not to be indebted to God, government and their fellow neighbours. After his preaching, he recognised the presence of important guest including the representative of the governor of Lagos State, Governor Sanwo-Olu, in the person of Mrs Olaide Ibrahim.

The priest again came up to the podium and the hymns began. A prayer was said and a few words were said on the importance of taking the Holy Communion. The celebrator was asked to take the communion after which other guests and family members took the communion. The priest prayed and the organist played another string of beautiful melodies as the elders of the church stepped out to present a gift to the celebrator, after which the priests also presented a gift. While all these activities were on, another representative from Governor Sanwo-Olu walked in to deliver a gift from the governor.  The celebrator wore a big beautiful smile as she received all the gifts.

The governor’s representative, who came in with an entourage, sat close to the celebrator hugged and wished her long life. Mrs Olaide Ibrahim also addressed the congregation, reading a letter from the governor. She pleaded on behalf of the governor for his absence as he was tied down with other responsibilities. In the letter the governor congratulated the celebrator, emphasizing how mama was important to Lagos State and to him. He also promised in the letter that he would see her in person on or before the end of the day.  The governors representative Mrs Olaide Ibrahim, emphasized how happy she was to deliver the message as she had never attended an event celebrating a life at 100. She also prayed for the celebrant and promised to deliver the celebrator’s message to the governor.  The church service came to a close with the singing of hymn, and all guest walks to the reception close the church.

At the reception, the celebrator danced in with her children as her great-granddaughter again sang songs of praises with her band. Mama took her seat and a few of her children steps out to say a few things about Mama. As Mrs Abiodun Fadayomi, the first daughter of Mama Dorcas recounted on mama’s close shave with death when she was 50 years old. In her speech, she made mention of her sibling’s sudden urge to visit their mother in Ondo State, on getting there she found out that she was in a terrible medical condition. Speaking further, she urged everyone to join her in thanking God on behalf of the celebrator. The wife of the first son also came to say a few things about the celebrator’s show of motherly love towards her. After this, the celebrator was ushered to cut her cake surrounded by her great-grandchildren, followed by her grandchildren and her children. A birthday song was also sung for the celebrator and her great-grandchild who also share the same day with her.

ONIRU Reveals His Over 25 Years Friendship With Oba ELEGUSHI

Why I Decided To Go Into The...