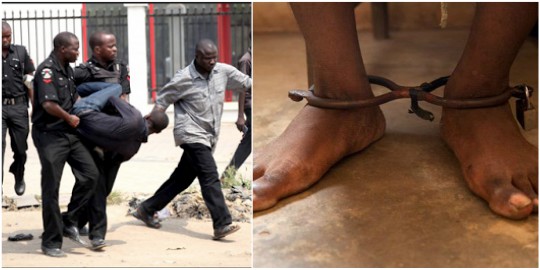 Officers of the Ogun State Police Command, have arrested 37-year-old Ifeanyi Ajaero, for allegedly chaining his 28-year-old wife, Obiageli, to a generating set from nightfall till dawn, after she had been seriously battered.
According the State’s Police Public Relations Officer, Abimbola Oyeyemi, the incident occurred at Ewooluwo Sagamu in Sagamu Local Government Area of the state.
Oyeyemi further disclosed that the suspect who was a member of the already
disbanded Merchant Navy, used an hand-cuff to chain his wife who had become weak as a result of serious beating she received from the suspect.
“The people in the neighborhood who had witnessed frequent beatings of Obiagelli by her husband, alerted the police over the latest incident, consequent upon which the DPO of Sagamu division, SP Aduroja Moses, led his men to the scene, rescued the victim and got the suspect arrested” he said.

On interrogation, however, the suspect admitted chaining the woman to generator, but he claimed his action was in self defence.

Meanwhile, the Commissioner of Police in the state, Ahmed Iliyasu, who described the action of the suspect as “an height of wickedness”, has ordered the immediate transfer of the case to anti human trafficking and child labour unit of the state investigation and intelligence department for further investigation and prosecution.

He, therefore, declared that the command will not tolerate any act of domestic violence irrespective of who is involved

Meet The Big Men Who Are Island...

Ronaldo Is First Footballer To Earn $1b...