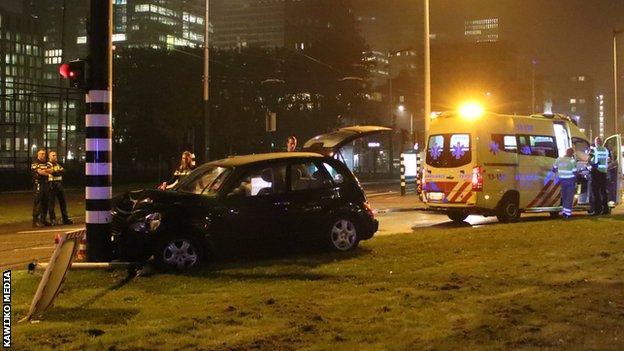 Manchester City goal poacher, Sergio Aguero has been injured in a car crash in Amsterdam, hours after attending a concert.

The 29-year-old Argentine was reported to be in a taxi on his way to the airport after watching singer Maluma perform.

City said he “was in Holland on his day off and has sustained injuries”.

Aguero is expected back in Manchester on Friday and will be examined by City’s medical team before the Premier League trip to Chelsea on Saturday.

Police in Amsterdam confirmed to the BBC that two people were in a taxi which crashed in the De Boelelaan area of the city.

Earlier in the evening, the Argentina forward posted a photo of himself and Maluma on Instagram with the message, “thanks for the invitation”.

Aguero’s former club Independiente sent the player their best wishes on Twitter, saying: “Strength and speedy recovery @aguerosergiokun! All @Independiente is with you at this difficult time.”

The striker has scored seven goals in eight matches for City this season, helping Pep Guardiola’s side reach the top of the Premier League and win their first two Champions League group matches.