Manchester City move into second place with victory at Bournemouth 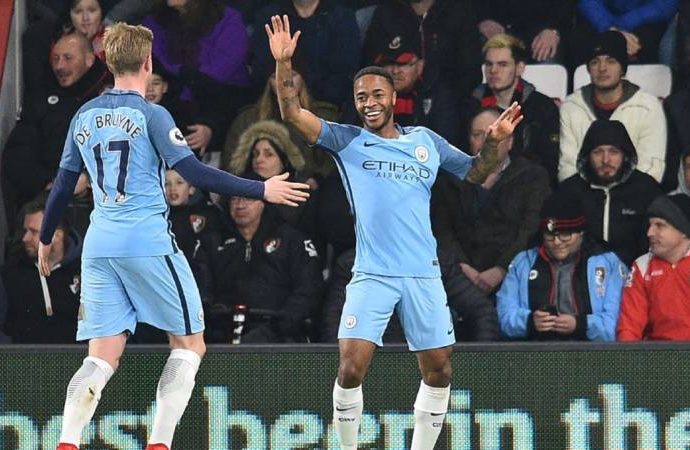 Manchester City moved to second place in the Premier League with a 2-0 victory at Bournemouth on Monday.

A Raheem Sterling strike and a Tyrone Mings own goal pulled Pep Guardiola’s men within eight points of league leaders Chelsea, two ahead of third-placed Tottenham, who fell 2-0 at Anfield on Saturday.

The early moments were marred by an injury, when Brazilian sensation Gabriel Jesus came off for Sergio Aguero in the opening 15 minutes with an apparent foot problem after coming down on the ankle of defender Simon Francis.

But the game heated up afterward, and City found their breakthrough on the half-hour mark. Leroy Sane’s low cross from the left took a fortunate deflection into the path of Sterling, whose first-time finish at the far post left Artur Boruc no chance in the Bournemouth net.

The goal marked the England international’s 50th Premier League goal, his sixth this season, and first since Dec. 18.

The hosts thought they’d worked an immediate equaliser minutes later, with Joshua King superbly firing past Willy Caballero from a cross on the right. But the forward was adjudged to have fouled City’s John Stones before the fine finish.

Bournemouth midfielder Jack Wilshere came off just before the break with an apparent ankle injury suffered when challenging David Silva for a ball. Benik Afobe took his place in Eddie Howe’s formation.

Aguero made the most of his sudden chance to impress 24 minutes after half-time — the Argentina international stretching and just getting a toe to a Sterling cross from the left. However, the ball took a deflection off Mings before finding the net, and was later ruled an own goal.

Sane nearly added a third in the 84th minute, but his powerful shot banged off the crossbar after finding himself with room just outside the six-yard the box.

Manchester City move into second place with victory at Bournemouth was last modified: February 14th, 2017 by Arinze Ago