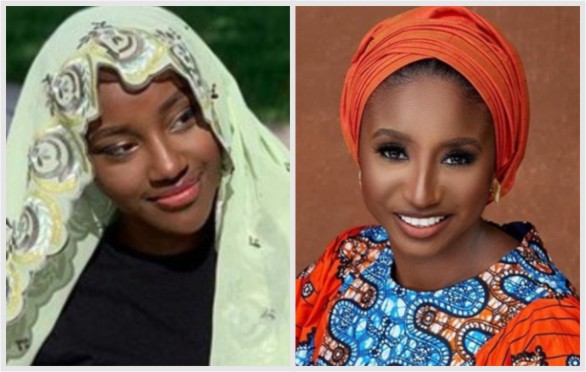 Up North, there are beautiful big babes who are calling the shots. They are sassy, hot and highly learned. They have all what money can buy and all of them are hot cakes for many eligible bachelors. This set of the bevy of beauties are not just ordinary, they are all from rich pedigrees. Their bloodline speaks class and affluence and their fathers have held or hold top positions in the government. Their fathers run big conglomerates and they are also involved in helping their fathers run their various businesses. Many of them reside in Abuja, Lagos and other northern states in the country. Listed below is an exclusive list of some of the rich, pretty and single big babes up north.

First on this list is Amina, the first daughter of the first citizen of Nigeria, President Muhammad Buhari. Popularly called Noor, Amina was born on September 14, 2004. She attended Kaduna International School and proceeded to other schools abroad. Next is Imani Mukhtar Shagari. She is a student reading Architecture. Her father is the former Deputy Governor of Sokoto State and granddaughter of a former president, Shehu Shagari. Manila Bayero is the late Emir of Kano, Ado Bayero’s granddaughter, she is a Law graduate of Angila Ruskin University, Cambridge. Aisha Yar’Adua is another pretty single northern babe. She is the pretty daughter of late President Yar’Adua.

Sidikat Sanusi is one of the pretty daughters of the Emir of Kano. What of Khadijat Sanusi? She is one of the daughters of the Emir of Kano and loves to live her quiet life. Khadija Sunusi fondly known as Yusrah is the daughter of the former CBN Governor and the Dethroned Emir of Kano HRH Sanusi Lamido Sunusi. In 2013, Khadija Yusra Sanusi graduated from the African Leadership Academy (ALA) in South Africa with a diploma in Entrepreneurial Leadership and African Studies.

In 2015, Khadija was admitted into The American University of Paris (AUP) to study Journalism and Creative Writing and she graduated three years later with Departmental Honours in Creative Writing. Khadija pursued her postgraduate degree in African Studies at the School of Oriental African Studies (SOAS), University of London. Khadija is currently a Sub-editor for The Republic Journal, a Blogger for MTVShuga and the President of Yashafeni, a platform for social awareness campaigns against vices in Northern Nigeria. Aziza Dangote is Aliko Dangote’s niece, Sani Dangote’s daughter. She is well-known for her humanitarian activities. Her Non-Governmental Organization (NGO) known as Orenda Foundation has been at the forefront of global health, development and empowerment – particularly in northern Nigeria quietly empowering the womenfolk and leading the advocacy for girl-child education. She graduated from University of Warwick in the UK with a Bachelor in Biomedical Sciences and her Masters from University of London. Aziza is rumored to be in a relationship with Aminu Waziri, the grandson of the opulent merchant in Kano, Aminu Waziri.

Keira el Rufai is also single. She is one of the pretty daughters of former FCT Minister and the current Governor of Kaduna State, Nasir el rufai. Saratu el Rufai is known by most people as Amna Elrufai. She is the niece of Kaduna State Governor, Nasir el Rufai. she is the daughter of Alhaji Bashir el Rufai who was the Chairman of the intercellular network. Amna obtained her bachelors degree in Accounting and Finance from the University of Leicester in 2017 and her masters in management in 2018 from the University of Central London.

Ateeka Abdulmunafi Sabrina is the daughter of a wealthy businessman, Alhaji AbdulMunaf Sarina, CEO of Azman Air and Azman Oil. She owns a clothing line called Bambaabyateey. Aya Indimi is the daughter of Oil mogul and Borno businessman, Alhaji Mohammed Indimi. She is also pretty and famous. Her sister Iman Indimi graduated from Lynn Univesity in Florida, US. She is a Sudanese Egyptian daughter of the wife of Borno billionaire, Alhaji Indimi. She is very much single too. Khadijah Abdulmunafi is the daughter of the CEO of Azman air and Azman Oil. She is the founder of an interior/home décor shopping company called Khadijah homes.

Tabitha Kwajafa and Mabruka Mai Deribe are also not young but very much single. They are also very beautiful. Fandy Hassan is also a super-rich single who is a top make up artist and beauty expert in Kano. She runs the popular Mekkyaj Fandy Makeup Studio. Rahama Sadau is not left out in this list. She is also pretty and single. Laura Mukhtar made the list. She is a top make up artist in Abuja. She also run a salon and restaurant. She is the brain behind the studio Ilaura.

Face of Allure, Shaheedarh Wambai is also single, she lives big as well. Aisha Sambo, popularly known as Shushi is the former Vice President, Namadi Sambo’s niece, and she is also former First Lady, late Maryam Babangida’s niece. She obtained her Bachelor’s degree in Marketing Communications Medis Economics and Media Psychology from Bournemouth University. She is the Directive Editor of Youth4youth and the founder of Sushi Shades.

Fatima Zara Bala Mohammed, popularly known as Zara Bala, she is the daughter of Bauchi State Governor and former Minister. She is a member of Al muhibba Foundation. She is a photographer by passion. She finished her undergrad in UK where she majored in architecture. Hillu Ibrahim Ali is the CEO and founder of Kambil Flowers and Café Kambil. She went to the regents secondary school and finished at St Mary’s School in Cambridge. She obtained her Bachelor of Arts, Economics from the University of Leicester. She is a dedicated activist with immense passion with advocacy against abuse and rape culture.

Why I Went Into The Fashion Business – LAGOS Fashion Designer, AYO BALOGUN